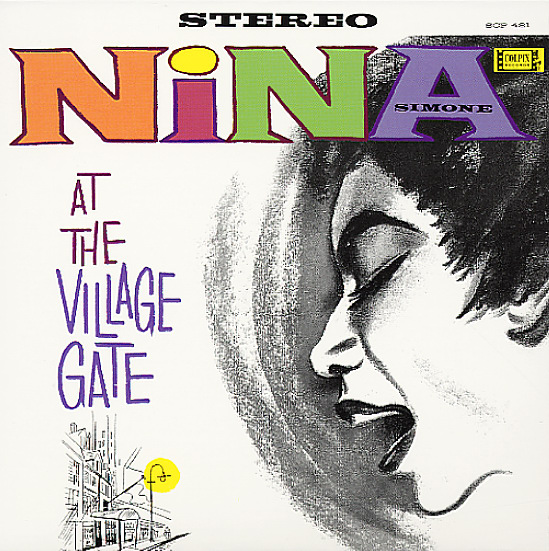 At The Village Gate

An album recorded relatively early in the career of singer Nina Simone – but a set that already shows the very unique approach that would make her a legend by the time the 60s moved on! Even the very first tune is a stunner – a haunting reworking of the favorite "Just In Time", but with Nina grunting instead of singing at the start – as the bass comes across with more power than the drums or piano – really shaping the song in moody tones! That sort of inventiveness follows on every other tune – making the familiar numbers sound very unique, and the unusual ones even more striking – as the set list also features numbers by Oscar Brown Jr, Olatunji, and Simone herself. The recording quality is great – intimate, yet lively – and the set's filled with longish readings of some great tunes that include "Bye Bye Blackbird", "Brown Baby", "Zungo", "Children Go Where I Send You", and "He Was Too Good To Me".  © 1996-2023, Dusty Groove, Inc.
(Mono gold label pressing with film strip logo. Cover has some wear, aging, and some discolored spots in back.)

New Kind Of Love
Roulette, 1963. Near Mint-
LP...$2.99
Joe Williams is away from Count Basie here, but he's still sounding great – and getting a slightly warmer approach overall – in keeping with the promise of the title! The arrangements aren't credited on the notes, but they've got a slightly lusher feel than Basie – a bit more ... LP, Vinyl record album