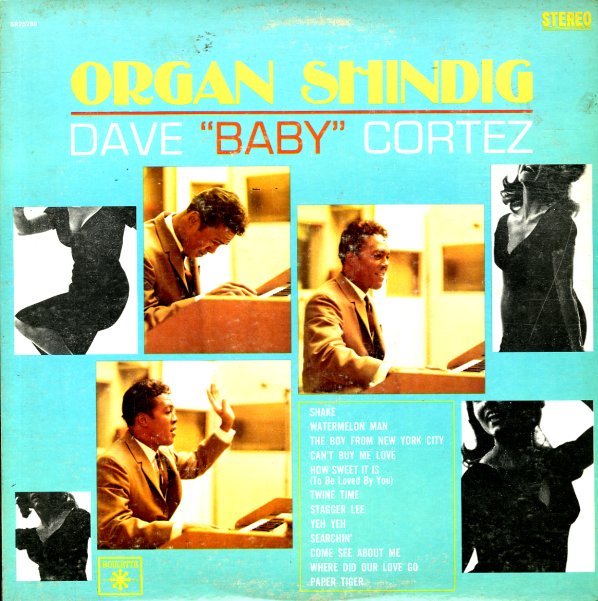 Groovy instrumentals from the great Dave Baby Cortez – all played with that tightness he brought to the organ in the 60s – a style of playing that paired down the modes the instrument had in jazz, and paved the way for countless others to help bring organ sounds to soul, rock, and other styles too! The backings have some nice rocking overtones, and Dave cooks beautifully in the setting – hitting the keys with a hard-burning mode that serves up plenty of mod soul riffing in the process! There's some great guitar and sax bits on the set too – and titles include"Shake", "Where Did Our Love Go", "Twine Time", "Watermelon Man", "Searchin", and "Paper Tiger".  © 1996-2020, Dusty Groove, Inc.

Basie One More Time
Roulette, Early 60s. Very Good+
LP...$16.99
The genius of Basie meets the genius of Quincy Jones – a 60s pairing that's every bit as great as the 50s pairing of Basie and Neal Hefti! Jones and Basie worked together in a number of settings during the 60s – including a very successful album for Frank Sinatra on Reprise – but ... LP, Vinyl record album

Basie/Eckstine Incorporated
Roulette, 1959. Very Good
LP...$2.99
Billy Eckstine gets a new lease on life – working here with great backings from the Count Basie band, in a mode that's a bit like some of Billy's own large ensemble recordings of the mid 40s! The sound is a bit more Basie-inflected than before, but that also unlocks some great swinging, ... LP, Vinyl record album

Count Basie & Sarah Vaughan
Roulette, 1960. Very Good
LP...$4.99 (CD...$4.99)
Sarah Vaughan gets some backing from Count Basie – making for a record that's one of her jazziest and swinging of the time! As with other Basie-related vocal sessions from the early 60s, this one has a soulful edge and a nice little bounce – one that makes for a more solid approach ... LP, Vinyl record album

School Of Rebellion
Roulette, 1958. Near Mint-
LP...$19.99
This ex-Kentonite leads a group of modernists (Frank Socolow, Don Sebesky, Bill Elton) through a suite of his excellent original compositions, including "An Esthete on Clark Street", "Pickwick", and "The Golden Apple", plus a reading of "Manteca" that's ... LP, Vinyl record album

Life Is A Many Splendored Gig
Roulette, 1958. Very Good+
LP...$14.99
Incredibly hip big band work from trumpeter Herb Pomeroy – proof that the Boston influence in the 50s was a very good force in modern jazz! The group here is large, but the sound is often quite lean – done with an open focus on the strongest soloists in the group – players who ... LP, Vinyl record album