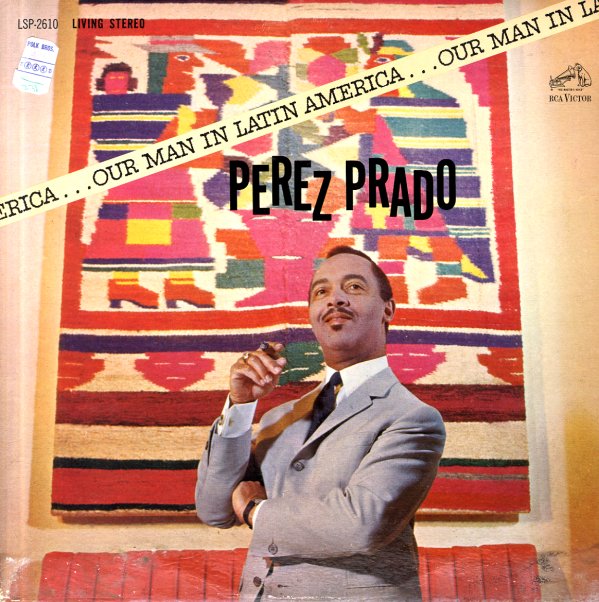 Our Man In Latin America

One of the best entries in RCA's classic "our man in..." series – and a nice one by Perez that has him breaking the format of his other releases for the label. In this one, he hits a lot of more modern grooves than on his 50's work – and he also introduces the "bongoson", a mixture of twist and Cuban "son" that sounds pretty groovy. Titles include "Uno", "Pachito E Che", "Tico Tico No Fuba", "Guares", and "Canto Siboney".  © 1996-2023, Dusty Groove, Inc.
(Stereo black label pressing with deep groove. Cover has a large split on the bottom seam and light surface wear.)

Mambo By The King (10 inch LP)
RCA, Late 50s. Very Good+
LP...$14.99
A great record of mambo tracks from Prado and his orchestra! Tracks include "The Whistling Mambo", "Cuban Mambo", "Perdido", and "Mambo Jambo". Some of the songs have vocals and each have really nice moments – and this original 10" LP has a very ... LP, Vinyl record album

Heart Of Havana
RCA, 1957. Very Good+
LP...$6.99 9.99
One of Cuba's biggest groups of the 50s – presented here in a set that got equal circulation in the US, thanks to RCA! The sound here is a nice precursor of the charanga groove that would dominate New York in a few years to come – violin from Rafael Lay, the leader of the group – ... LP, Vinyl record album

Recorded In Europe
RCA, 1962. Very Good+
LP...$4.99
(Living Stereo pressing with deep groove. Cover has some aging and a small name in marker in back.) LP, Vinyl record album