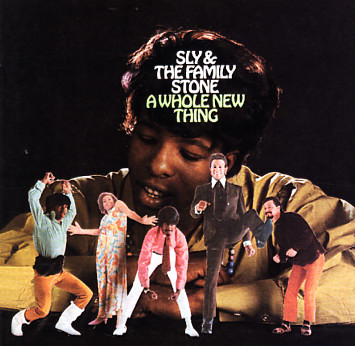 A Whole New Thing, indeed – the first album ever from Sly &The Family Stone – and a record that would forever change the face of pop, funk, and soul music! Even at this early point, all the group's best energy is firmly in place – a mad mix of raw funky roots with righteous late 60s energy – all served up with a lot more focus than most of the indie acts of the time, with enough of a punch to cross the group over to a much wider audience! Most tunes are short, hard, and tight – and the album features few familiar hits – which almost makes it a new discovery if you've only ever heard Sly's work from a "greatest hits" perspective. Titles include "Dog", "Bad Risk", "Underdog", "Run Run Run", "Turn Me Loose", and "That Kind Of Person".  © 1996-2022, Dusty Groove, Inc.
(Mono white label promo. Cover has light surface & edge wear, small center split on bottom, name in pen, ink stamp on the back. Labels have name in pen.)

Stand!
Epic, 1968. Very Good+ Gatefold
LP...$23.99
Hard to find a stronger early album by Sly – as this one has him still funking hard, but also getting his soul bag together a bit more, hitting some really righteous vibes that mix together politics and partying in an incredibly seductive way. The album's filled with anthemic numbers like ... LP, Vinyl record album

Back On The Right Track
Warner, 1979. Near Mint-
LP...$6.99
Sly Stone's definitely back on the right track here – returning to the heights of his earlier powers in this late 70s comeback album for Warner Brothers! The record's got a lot of touches of the old Sly funky sound, but it's done in a slightly tighter style too – a bit more polish than ... LP, Vinyl record album

Small Talk
Epic, 1974. Near Mint-
LP...$14.99
Sly's still doing pretty nice for himself in 1974 – with a sound that's perhaps a bit warmer than on the early records, but still nice and soulful – and peppered with a good dose of funk! The groove is really great on the set – bubbling with a more "deep down" feel than ... LP, Vinyl record album

Sly & The Family Stone Greatest Hits
Epic, 1970. Very Good Gatefold
LP...$14.99
Almost a "greatest hits" of greatest hits albums – one of those collections that almost sold more copies than all the full albums by the artist – forever earning Sly & The Family Stone a place in record collections around the globe! All the hits are here, laid out back to ... LP, Vinyl record album

Inner Feelings
Epic, 1982. Near Mint-
LP...$5.99
Great early work from Billy Ocean – a smooth album of understated groovers, all done in a style that's nicely retrained, and which places a good focus on Billy's great vocals! Most of the record skips along in a warm mellow groove – never too over the top, and in a way that makes us ... LP, Vinyl record album

Destiny
Epic, 1978. Near Mint- Gatefold
LP...$16.99 (CD...$3.99)
A heavy groove and a heady title that points the way towards Michael Jackson's soon-to-be legendary solo career – all served up in a batch of tracks that resonate nicely with the Off The Wall groove! The sound here really isn't disco or club, but it's a nicely upbeat groove that shows The ... LP, Vinyl record album

Evergreen
Epic, 1974. Very Good+
LP...$14.99
A surprisingly great album by Booker T – recorded after his Memphis years with The MGs, and his duets with Priscilla – and done in a sweetly mellow style that has Booker emerging as a whole new style of songwriter! As with all the post-MG albums, Booker sings lead vocals on all tracks ... LP, Vinyl record album

It Takes Two
Epic, 1985. Near Mint-
LP...$14.99
Probably the biggest album ever from the brother/sister team of Katreese and Jerry Barnes – working here as Juicy, in a sweet smooth 80s groove style that's mighty nice! Deodato produced the album, and it's similar to some of the other soul material he was handling in the 80s – slick ... LP, Vinyl record album