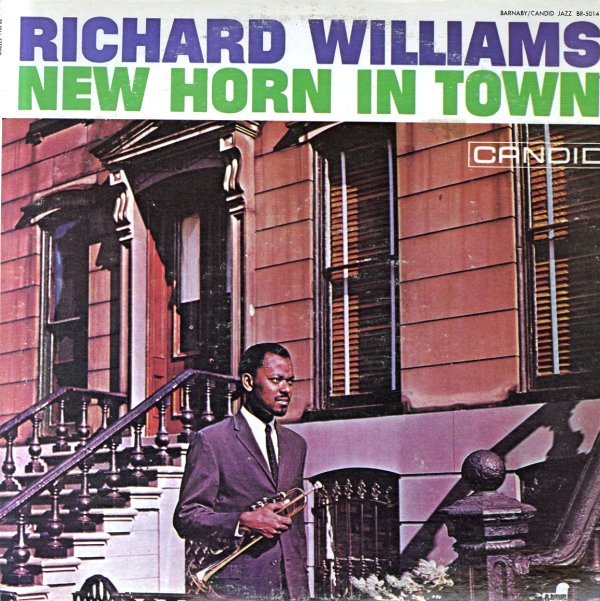 A brilliant session of modernist hardbop – one of the few records ever cut as a leader by trumpeter Richard Williams! Williams was a key part of the Charles Mingus group for a few years – and his soulful approach ranks with Ted Curson as some of the most compelling underground trumpet work of the early 60s. The set features Williams in a great group – with Leo Wright on alto, Reggie Workman on bass, Richard Wyands on piano, and Bobby Thomas on drums – and they're playing material that isn't too far out, but which does have significantly modern tendencies. Williams solos are fantastic, and the album is proof that he was one of the 60s great under-recognized talents! Titles include "Ferris Wheel", "Blues In A Quandry", "Raucous Notes", and "Renita's Bounce".  © 1996-2021, Dusty Groove, Inc.
(70s Barnaby pressing. Cover has some waviness and staining along the bottom.)

Air – Featuring Archie Shepp.
Candid, 1960. Very Good
LP...$14.99
Cecil Taylor and Archie Shepp – two key modern figures of the 60s, working here together in a seminal session recorded at the start of the decade! The album's approach is definitely dictated by Taylor – as the tunes have a piano-driven quality that's quite different than most music ... LP, Vinyl record album

Canadian Concert Of Bill Evans
Can Am (Canada), 1974. Very Good+
LP...$29.99
A great live date – like all of the few albums on this excellent label – with Bill Evans on piano, Eddie Gomez on bass, and Marty Morrell on drums! Titles include long takes on "Elsa", "Midnight Mood", and "Sugar Plum". LP, Vinyl record album