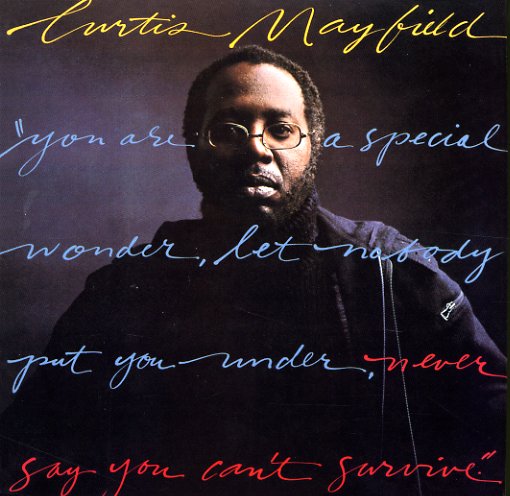 A great album of mellow soul tracks from Curtis Mayfield – laidback, slinky, and almost to his earlier work what Let's Get It On was to the early 70s career of Marvin Gaye! The album's got a warm, soulful vibe that's totally great – not as all-out funky or politically righteous as before, and instead more deeply personal, and almost intimate at times – in a way that really lets Curtis open up with those fragile and heartbreaking vocals that made his 60s work so great. The restraint here is totally great – another mid 70s masterpiece from arranger Rich Tufo – and at times, Mayfield hits a similar mode to some of Leroy Hutson's best Curtom work from the time! Titles include "Just Want To Be With You", "All Night Long", "When We're Alone", "I'm Gonna Win Your Love", "Sparkle", "Never Say You Can't Survive", and "Show Me Love".  © 1996-2022, Dusty Groove, Inc.
(Includes the insert. Cover has ring and edge wear, a cutout notch, lightly bent corners and a mostly unglued top seam.)

Give, Get, Take And Have
Curtom, 1976. Very Good-
LP...$9.99
An overlooked mid 70s gem from Curtis Mayfield – a record that's recorded with a slightly less righteous mode than his earliest work for Curtom – but still plenty darn great! The emphasis here is on warmer, sweeter styles – tunes that mix a subtle approach to funk with some great ... LP, Vinyl record album