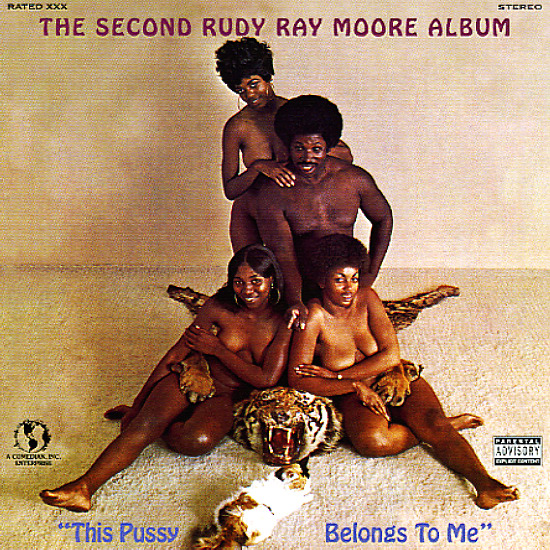 Rudy Ray Moore's second album, and almost hipper than the first – thanks to some key musical backings from The Fillmore St Soul Rebellion! The vibe here is as rough and raw as you'd expect – a no-holds-barred version of party records, with Rudy using plenty of language hardly heard this strongly on record again until the hip hop generation. The music's often mixed a bit lower than the vocals, but is still present enough to make things sound funky – and titles include the classic "Mr Big Dick", plus "The Gorillas Are Coming", "California Poetry", "Hurricane Anne Meets Dolemite", and "40 Pounds of Chitlings". Language is raw – so be warned!  © 1996-2022, Dusty Groove, Inc.
(Green label Comedian Series pressing. Cover has a mild waviness feel.)

Eat Out More Often
Kent, Early 70s. Near Mint-
LP...$5.99
Classic stuff – Rudy's first album, and a fitting launch to his famous career of party records and live club performances! The cover's got Rudy in front of a nude black model, laying back on the couch, and encouraging him to do the thing that's implied by the title – but the record ... LP, Vinyl record album

Ike & Tina Turner Revue Live (white cover)
Kent, 1964. Near Mint-
LP...$24.99
A smoking live set from Ike & Tina Turner – and one that really gives you a rare glimpse at the full picture of the way they were operating back in the 60s! There's a freshly gritty feel to the record that goes way beyond cliches of the pair's later work – Tina clearly in the lead ... LP, Vinyl record album