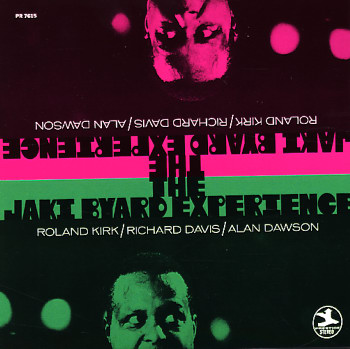 An amazing (and often forgotten!) quartet session that brings together the enigmatic pianist Jaki Byard and the mind-blowing multi-reed player Roland Kirk! Kirk and Byard had played together previously – most notably on some of Kirk's Mercury recordings – and they fit together perfectly in this mad session of off-kilter jazz that takes off beautifully from the very first note! Rhythm is by the crack team of Alan Dawson on drums and Richard Davis on bass – a pair who can open up creatively when needed, but also return the record to a soulful swing when it's getting too far out. The whole thing's great – and titles include "Parisian Thoroughfare", "Evidence", "Memories Of You", and "Hazy Eve".  © 1996-2021, Dusty Groove, Inc.