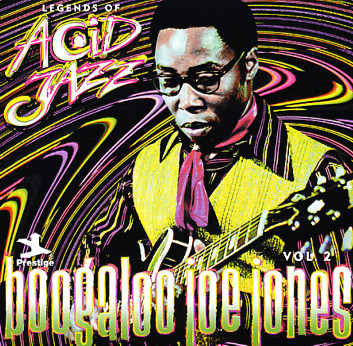 Legends Of Acid Jazz – No Way/What It Is

Prepare yourself for some massive guitar-heavy funk – with 2 classic Prestige albums from the legendary Ivan Boogaloo Joe Jones! First up is No Way – a record that features him working with a young Grover Washington Jr on tenor, whose got a sound here that's way harder than on some of his later albums – and right up there with the best of the Prestige jazz funk greats. Sonny Phillips plays organ and electric piano, and the dark horse Butch Cornell gets in some organ licks on 2 tracks. Bernard Purdie holds down the fort nicely on drums, and the album's got a nice Fender bass to groove things strong in the rhythm department. Tracks include "No Way", "Holdin Back", "If You Were Mine", "Sunshine Alley", and "I'll Be There". What It Is is more killer funkiness from Boogaloo Joe Jones! Grover Washington Jr makes an incredible appearance here – sounding much harder and heavier than on some of his Kudu recordings – more of a gritty soul jazz player, working beautifully alongside the sharp guitar of Boogaloo Joe Jones, and the sweet organ of Sonny Phillips! The groove is lean, clean, and a bit laidback – not as frenetic as some of Jones' other jams, but in a great way that shows a new sense of space and timing in his groove! Other players include Bernard Purdie on drums and Jimmy Lewis on Fender bass – and titles include "Inside Job", "Fadin", "What It Is", and a nice cover of "Ain't No Sunshine". Amazing guitar work throughout – and a very tight batch of funky jazz!  © 1996-2022, Dusty Groove, Inc.

Charles Earland In Concert Live At The Lighthouse/Kharma
Prestige, 1972/1974. New Copy
CD...$9.99 14.98
A great set that brings together 2 live albums from organist Charles Earland! Live At The Lighthouse is a real killer – with that tight jazzy groove that Earland had on his first few albums for Prestige, a mix of jazz funk and soul jazz, handled with an incredible touch on the organ! The ... CD