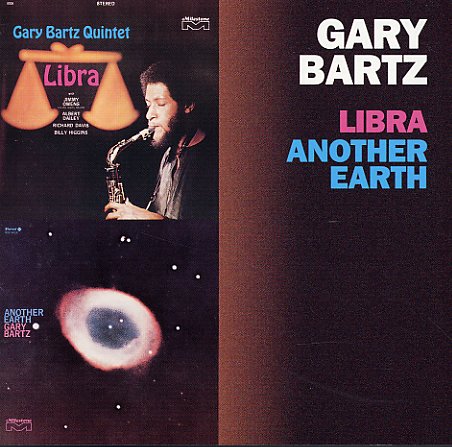 Early soul jazz brilliance from a young Gary Bartz – music that pre-dates his Ntu Troup, and his work with Larry Mizell! Libra is fantastic early work from Gary – and probably his rarest record ever! The album was cut at a time when the young Bartz was first coming to prominence in the hip late 60s soul jazz group of Max Roach – and Bartz's playing at the time is a perfect model of mid-Coltrane searching with some of the tighter sides of soul jazz that were being forged at labels like Blue Note by players like Hank Mobley or Lee Morgan. The record's a masterpiece of youthful soulful energy – and the group includes Jimmy Owens on trumpet, Richard Davis on bass, Albert Dailey on piano, and Billy Higgins on drums, all players who are perfectly matched to fit Bartz's stridently creative vision. His solos on alto are impeccable – some of the most meaningful we've ever heard on the instrument from the time – and the album's a great one all the way through! Titles include "Air & Fire", "Eastern Blues", "Libra", "Freedom Of The Day", and "Cabin In The Sky". Another Earth is amazing too – one of the first that Gary Bartz ever cut – done during a time when he'd been working with Max Roach and a super-hip group of younger soul jazz players who would go onto shape the sound of the 70s. Bartz leads a group that includes Stanley Cowell, Freddy Waits, Charles Tolliver, Pharoah Sanders, and Reggie Workman – and the music sounds like it was lifted from one of the best albums on Strata East from the 70s. There's no funk, no vocals, no weird rhythms – just pure spiritual jazz, played to perfection, and filled with a creative vitality that most of the players had lost a few years later. Tracks include the album-side "Another Earth", plus "Dark Nebula", "UFO", and "Perihelion & Aphelion". Note: CD omits the track "Disjunction" from Libra – due to space restrictions.  © 1996-2022, Dusty Groove, Inc.