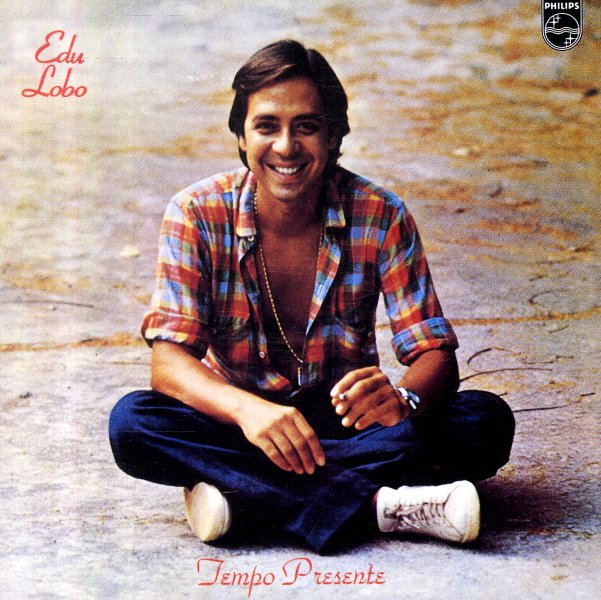 Wonderfully warm electric work from Edu Lobo – a sublime late 70s set that we'd stack right up there with our favorite albums of the time by artists like Joyce, Marcos Valle, or Joao Donato! As with all three of those artists, Edu uses some 70s electric elements to really transform his sound – but always in a way that's never commercial or slick at all – and which instead realizes this complicated jazzy vibe that comes through even better with this instrumentation than it did during the bossa nova years! Lobo's vocals have a quality that's mature, yet really personal too – and the album's a real testament to his great songwriting skills over the years – even on the few instrumental tracks. Joyce guests on one track, as does Dorival Caymmi – and the set also features some backing vocals from Boca Livre. Titles include "Tempo Presente", "Rei Morto, Rei Posto", "Quase Sempre", "Balada De Outono", and "Dono Do Lugar".  © 1996-2022, Dusty Groove, Inc.
(Includes the inner sleeve with lyrics. Cover has a small import sticker in one corner.)

Camaleao
Philips (Brazil), 1978. Very Good+
LP...$38.99
A gem of a later album from the great Edu Lobo – very different than his bossa recordings, and with a sophisticated jazzy vibe that perfectly illustrates all the growth he'd achieved during the 70s! The songs are wonderful – complex and yet really personal, with a quality that rivals ... LP, Vinyl record album

Dois Na Bossa - Numero 2
Philips (Brazil), 1966. Very Good
LP...$34.99 (CD...$14.99)
A year after their debut, Elis Regina and Jair Rodrigues are back on stage with a second lively set of tracks – tightly smoking material that weaves together bossa, samba, and jazz – all with an edge that's almost even greater than Elis' later studio albums! Even at this young age, her ... LP, Vinyl record album

Ela
Philips (Brazil), 1971. Near Mint-
LP...$29.99
Elis Regina never lets us down – as you'll hear on this great record from 1971! The album captures Elis straddling the fence of her styles – one foot in the older jazzy bossa/samba camp, the other in the more sophisticated range of baroque MPB she virtually invented. Her voice is ... LP, Vinyl record album

Ben
Philips (Brazil), 1972. Near Mint-
LP...$149.99 (CD...$5.99)
A stunner of a record from the mighty Jorge Ben – and a record that catapulted the Brazilian singer to international fame at the time! Ben had already been making magic for almost a decade down in Brazil – and his compositions and grooves left an undeniable impact on the scene in the ... LP, Vinyl record album

Quando O Carnaval Chegar
Philips (Brazil), 1972. Near Mint-
LP...$24.99
A fantastic soundtrack recorded in the immediate post-Tropicalia years – featuring some of the best early 70s work by Chico Buarque, Nara Leao, Maria Bethania, and others! The cover has a mad image with Buarque, Leao, and Bethania in top hats and shiny uniforms – and the music follows ... LP, Vinyl record album

Festa Para Um Rei Negro
Philips (Brazil), 1971. Very Good
LP...$14.99
A very compelling album – and a rootsy change from the work Jair of Rodrigues during the 60s! The album starts out with a strongly forro-based groove – and although it shifts back to other samba sounds through the progression of the songs, there's a distinctly (and slightly radical) ... LP, Vinyl record album

Juntos
Philips (Brazil), 1984. Near Mint- Gatefold
LP...$11.99 (CD...$4.99, CD...$8.99)
A stone classic from the great Ivan Lins – a set recorded at a time when he was fast becoming a big name on the global scene, not just in Brazil – thanks to his wonderful sense of songwriting and lyricism! The album's almost a celebration of all that Lins had done so far – put ... LP, Vinyl record album

Certain Smile, Certain Sadness
Verve, 1966. Very Good
LP...$19.99
Kind of a dream combination in one little album – especially if you dig breezy bossa from the 60s! Back in 1966, Verve Records got the great idea of teaming up its (then) biggest Brazilian imports – vocalist Astrud Gilberto and organist Walter Wanderley – both of whom were ... LP, Vinyl record album