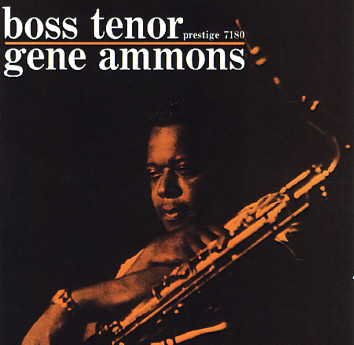 A soul jazz classic from Gene Ammons – the kind of session that easy made him "boss" on tenor – with a tone and conception that few other players could touch! The set is done in a style that's laidback, but never too loose – bouncing along in that "with conga" style of rhythm that was used strongly at the start of the 60s – with Ray Barretto on percussion, alongside Tommy Flanagan on piano, Doug Watkins on bass, and Art Taylor on drums. The style is nice and echoey – a mode that works well not only here, but on most of the 22 other albums that Ammons went onto record during the next 2 years! Titles include "Close Your Eyes", "Canadian Sunset", "Hittin' The Jug", "Confirmation", and "Blue Ammons".  © 1996-2020, Dusty Groove, Inc.
(Silver & black label NJ pressing with deep groove, RVG stamp, AB etch. Cover has light wear with some splitting.)

New Ideas (second cover)
Prestige, 1961. Sealed
LP...$19.99
Compelling early work from trumpeter Don Ellis – and a set that's almost equally great for the presence of Jaki Byard on piano! The work's quite different than some of Ellis' other material – a bit more sharp and stark, and played by a group that includes Byard on piano, Al Francis on ... LP, Vinyl record album