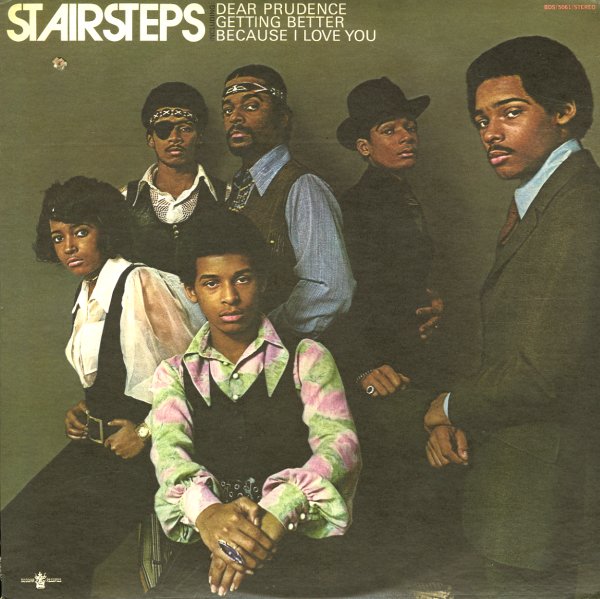 A really heady set from The Five Stairsteps – a record that shows the group looking older (and tougher!) on the cover, and one that also shows some maturity in their sound too! We're not sure what was in the water at the time, but these guys definitely seem to be drinking in a bit of the trippier elements of their generation – from their hippie look on the cover, to the overall mix of material, which includes a few surprising Beatles covers too! Arrangements are by Stan Vincent and Tony Davilo – who create a nice blend of Chicago soul and psych-styled touches – while still allowing the group's harmonies to get sweet at all the right moments – especially on their sublime classic "Ooh Child" – a track you'll recognize right away, and a gem that never gets old! Other titles include the funky "Vice The Lights", versions of "Dear Prudence" and "Getting Better", and the cuts "What About Your Wife", "Sweet As A Peach", and "Up & Down".  © 1996-2022, Dusty Groove, Inc.
(Cover has splitting on the top seam, some notes in pen, and light wear. Labels have a name in pen.)

Angie
Buddah/Arista, 1978. Very Good+ Gatefold
LP...$7.99
Angela Bofill's sublime first album – a mixture of jazzy soul and soulful jazz, all put together with a sound that's really a cut above most of her contemporaries! As with Jean Carn or Phyllis Hyman, there's a sophistication to Angela's sound here that indicates roots in much hipper ... LP, Vinyl record album

Romantic Journey
Buddah, 1976. Near Mint-
LP...$6.99
A warmly romantic journey from the stellar Norman Connors – but a set that's also got a fair bit of spiritual jazz undercurrents too! Norman's at that perfect Starship point in his career – giving equal space to the vocals and instrumental passages on the record – at a level that ... LP, Vinyl record album

Norman Connors Presents Aquarian Dream
Buddah, 1976. Very Good+
LP...$26.99
A wonderful debut from Aquarian Dream – a group who first appeared under the direction of Norman Connors – and who also have lots of the same blend of jazz, soul, and funk you'd find in Connors' own music of the time! Yet Aquarian Dream are very much their own bag, too – a ... LP, Vinyl record album

More More More
Buddah, 1976. Very Good+
LP...$9.99
The adult film star who became a chart act – and thanks to some very skillful help from Gregg Diamond, who wrote, produced, and arranged the whole record, the title cut "More, More, More" went onto become a huge dancefloor classic. The album features a 6 minute version of the cut ... LP, Vinyl record album

Fickle
Buddah/Arista, 1983. Very Good+
LP...$2.99 4.99
A mix of 80s groove and mellower material from Michael Henderson – a sweet extension of the jazzy soul he first laid out in the 70s! The style here is a bit more electric and contemporary than before – less of the deeper, warmer tones – and a bit more synth drums and keyboards. ... LP, Vinyl record album

Blind Baby
Buddah, 1975. Sealed
LP...$11.99
A classic album by this righteous soul collective – and one that shows them taking a strong step away from their work at RCA with Harvey Fuqua. This one has the group (ever-enormous as always!) absorbing some of the other elements of modern soul that were floating around at the time – ... LP, Vinyl record album