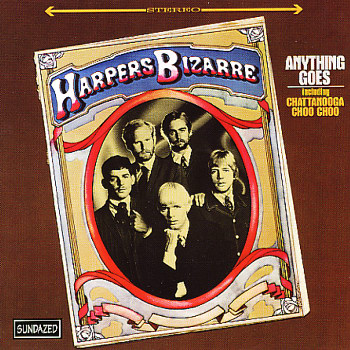 Bizarre is right – and incredibly hip too! This was the group's second album – and while it has a lot of similarities with the first, it's also a lot deeper of an expression of their strange blend of harmony vocals, sweet 60s pop, and the nostalgia for the early 20th century that was running through the Burbank Warner scene that included a young Van Dyke Parks, Randy Newman, Lenny Waronker, and other LA underground of the mid 60s. The whole record fits together beautifully – beginning with an old-timey radio kind of announcer, then sliding into sublimely crafted harmony tunes that include originals from the LA luminaries and the group, plus a few other surprising covers. Titles include the hit version of "Anything Goes", plus "The Biggest Night Of Her Life", "Milord", "Virginia City", "High Coin", "Jessie", "This Is Only The Beginning", and "You Need A Change".  © 1996-2021, Dusty Groove, Inc.
(Gold label stereo pressing. Cover has light wear.)