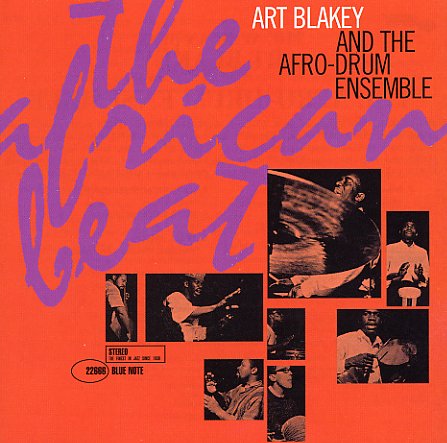 A completely righteous mix of jazz and African percussion – put together by drummer Art Blakey at a time when he was riding high with the Jazz Messengers, but also was willing to work on great experiments like this! The album's years ahead of its time – and arguably opens the door for countless spiritual jazz projects like this in the 70s, more proof that Blakey was a groundbreaking artist who was always opening doors for others! Blakey's own work on drums is joined by percussion from Montego Joe, Chief Bey, Garvin Masseux, James Ola, Folami, Robert Crowder, and Solomon Ilori – the last of whom would record his own record for Blue Note – and the rest of the group features Yusef Lateef on flute and tenor, Curtis Fuller on trombone, and the great Ahmed Abdul-Malik on bass – a great choice for the record, given that he was mixing together similar modes on his own records of the time. Titles include "Tobi Ilu", "Love, The Mystery Of", and "Obirin African".  © 1996-2022, Dusty Groove, Inc.
(Stereo New York pressing, with Van Gelder stamp. Vinyl is nice and clean, and cover is very nice.)