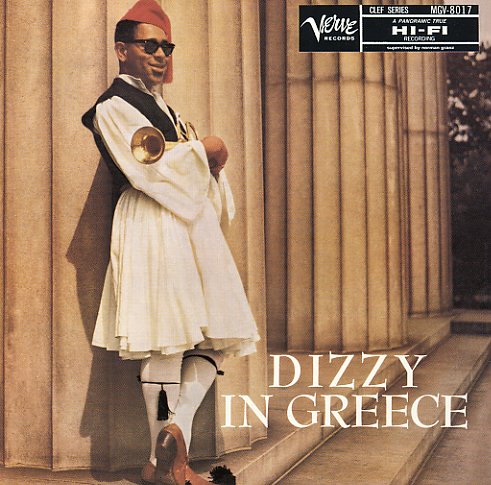 Dizzy Gillespie's Big 4 (OJC)
Pablo/OJC, 1974. Near Mint-
LP...$9.99
Dizzy's Big 4 here are a quartet of players that includes Ray Brown on bass, Joe Pass on guitar, and Mickey Roker on drums – all of whom work with Dizzy in a lightly skipping groove that's a nice contrast to some of his other 70s work! The style certainly has some of the spacious qualities ... LP, Vinyl record album

Dizzy Gillespie & The Double Six Of Paris
Philips, 1963. Near Mint-
LP...$8.99
A rare 60s meeting of groovy talents from both sides of the Atlantic – and a record that matches the trumpet of Dizzy Gillespie with the hiply swinging vocals of The Double Six Of Paris! The group were a wonderfully groovy precursor to the Swingle Singers – and sung in a scatting ... LP, Vinyl record album

Have Trumpet Will Excite
Verve, 1959. Very Good
LP...$9.99 (CD...$6.99)
Diz breaks past his bop playing, takes a bit of a turn towards swing-based material, and also hits this nice rolling groove that gives a bit of a peek at the way he'd sound in the 60's, when he had Lalo Schifrin on piano, and more of a Latin sound. He's backed here by Junior Mance on piano, Les ... LP, Vinyl record album

Dizzy Gillespie At Newport
Verve, 1957. Very Good-
LP...$11.99
One of the best albums ever in Verve's classic set of recordings from the 1957 Newport Jazz Festival – a set that captures the Dizzy Gillespie group of the decade in top live formation! The ensemble here is plenty hip – with a young Lee Morgan joining Dizzy on trumpet, and a host of ... LP, Vinyl record album

Greatest Of Dizzy Gillespie
RCA, Late 40s/1961. Very Good
LP...$6.99
Great RCA comp of Dizzy's earlier bop sides for the label, many of which came out first only as singles. Tracks include all the classics like "Cubana Be", "Cubana Bop", "Manteca", "Night in Tunisia", and a whole bunch more that you've heard him reprise a ... LP, Vinyl record album

Stan Meets Chet
Verve, 1958. Near Mint-
LP...$39.99
A classic meeting of these two talents – recorded in Chicago with a Chicago rhythm section of Jodie Christian, Victor Sproles, and Marshall Thompson. The album's an odd one, and is recorded with less of the impeccability of some of Verve's other sessions (which is probaby how the Chicago ... LP, Vinyl record album