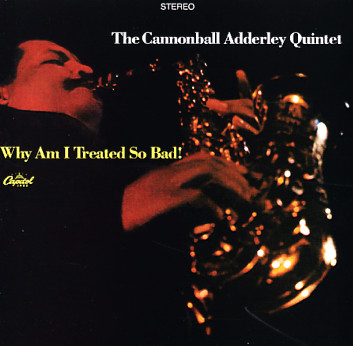 If you ever needed a key example of the genius of Cannonball on Capitol Records, this tight little set may well be it! The record's got all the best elements of a Cannon classic firmly in place – production by David Axelrod, electric piano by Joe Zawinul, and some tremendously soulful work from Cannon and Nat Adderley on their respective horns – all presented with a sense of relaxed tightness (if we can use such a phrase) that's jaw-droppingly brilliant all the way through! Cannon speaks a bit and pushes the band into action with charisma and warmth caught nicely by Axelrod's recording – and the band grooves on long, snakey tunes that mix equal parts funk and soul jazz together, coming up with the quintessential Adderley groove on nearly every number! Tracks include the seminal "Why Am I Treated So Bad", plus "Mini Mama", "I'm On My Way", "One For Newk", "The Scene", "Yvette", and "The Other Side".  © 1996-2021, Dusty Groove, Inc.
(Rainbow label mono pressing. Cover has light wear and a name in pen.)

Plays Bird
Capitol, 1973. Near Mint-
LP...$2.99
A completely fresh take on the Charlie Parker aesthetic of the bop generation – updated for the 70s, but in ways that are still pretty classic overall! The group's a large one, but plays with a tightness that goes way past their gimmicky name – thanks to players who include Med Flory ... LP, Vinyl record album