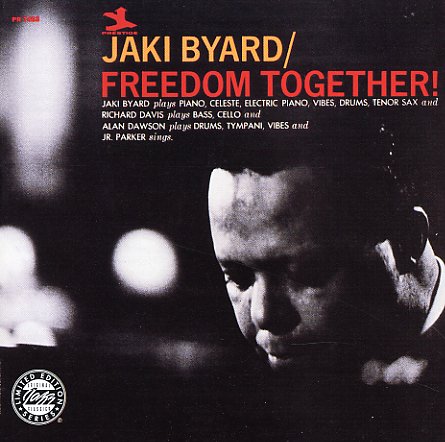 A beautiful bit of insanity that properly displays why we think Jaki Byard is one of the greatest overlooked talents of the 60's! Jaki plays here not just on his usual piano – but also electric piano, celeste, vibes, and even a bit of tenor – shifting wonderfully to match the spirit of his changing moods on the set – and working with superb backing from the team of Richard Davis (on both bass and cello) and Alan Dawson (on drums, vibes, and tympani). Junior Parker joins in on the record – singing on 2 tracks on the set plus playing the unusual "lagerphone" – and arrangements are very weird, with a memorable mix of modernist ideas, all handled with the down-to-earth sensibility that made Byard so great. Titles include "Ode To Prez", "Nocturne For Contrabass", "Freedom Together", and a great version of "Young At Heart", cut a few years before Muhal Richard Abrams did his nutty version!  © 1996-2021, Dusty Groove, Inc.
(Mono blue trident label pressing.)