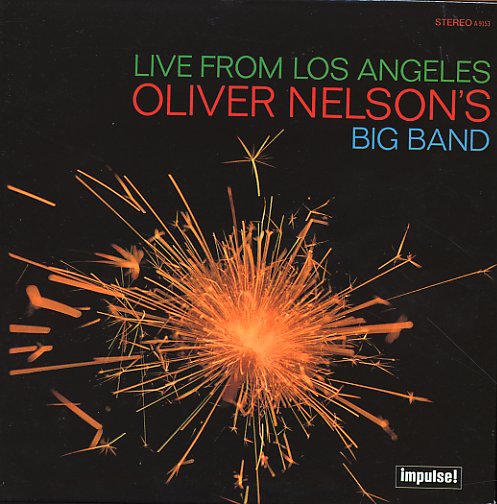 A unique little outing for Oliver Nelson – one that breaks him out of the familiar territory of the studio, and puts him in a much more spontaneous live setting! Nelson's playing soprano sax on the album – using the instrument in an edgey way that has echoes of Coltrane, yet which also fits in nicely with the usual Nelson groove – a fully soulful approach to a larger ensemble, heard famously on countless sessions for other artists in the 60s, but even better hear with Oliver at the helm! Other players on the record include Bobby Bryant, Tom Scott, Frank Strazzeri, Mel Brown, and Lou Blackburn – coming together with Nelson in a hip take on the west coast soul jazz groove of the time. Titles include Nelson's own "Miss Fine" and "Guitar Blues", plus lively versions of "Night Train" and "Milestones".  © 1996-2022, Dusty Groove, Inc.
(70s green label pressing. Cover is lightly stained and wavy at 4 inches along the spine, with a small corner cut, some surface wear, notes in pen inside the gatefold, and a name in pen in back.)

Dealer
Impulse, Mid 60s. Very Good- Gatefold
LP...$29.99
One of Chico's classic recordings for Impulse, and a weird batch of tracks that have an off-beat sound to them that's hard to categorize. The group includes Ernie Hayes on organ, Arnie Lawrence on alto, Larry Coryell on guitar, and a guest appearance by Archie Shepp on piano. Tracks include " ... LP, Vinyl record album

Point Of Departure
Impulse, 1963. Near Mint- Gatefold
LP...$19.99
A great record – and one that's filled with so many wonderful little moments! The whole thing's a very cool, very off-beat set of jazz tracks recorded by vibist Gary McFarland, with a group that includes Jimmy Raney on guitar, Richie Kamuca on tenor, and Steve Swallow on bass – a ... LP, Vinyl record album

Live At The Village Vanguard Again!
Impulse, 1966. Near Mint- Gatefold
LP...$59.99
John Coltrane returns to the Village Vanguard – but his sound here is a lot more far-reaching than a few years before! The album's a great counterpart to the first Vanguard session – as it takes all of the bold, soaring energy of that date, and balances it with the newly introspective ... LP, Vinyl record album