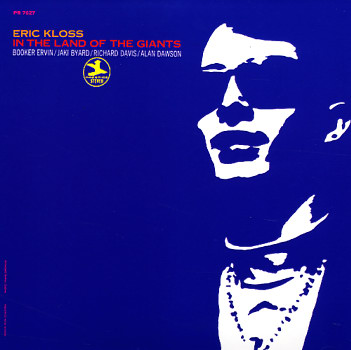 In The Land Of The Giants

Eric Kloss' sessions for Prestige somehow always get overlooked – but do yourself a favor and don't pass this one by! The record's a crackling bit of modernist free play, with a very soulful edge – and the group includes Booker Ervin, Jaki Byard, Richard Davis, and Alan Dawson all joining Kloss as he hits his mid-period "exploratory" stage. His alto is super-crisp here, and although he's reaching out a bit more than on earlier albums, he never manages to lose the swing that made him sound so great right out of the box. Tracks include "So What", "When Two Lovers Touch", and "Sock It To Me Socrates".  © 1996-2020, Dusty Groove, Inc.
(Blue circle logo label stereo pressing with DBH etch. Cover has light wear.)