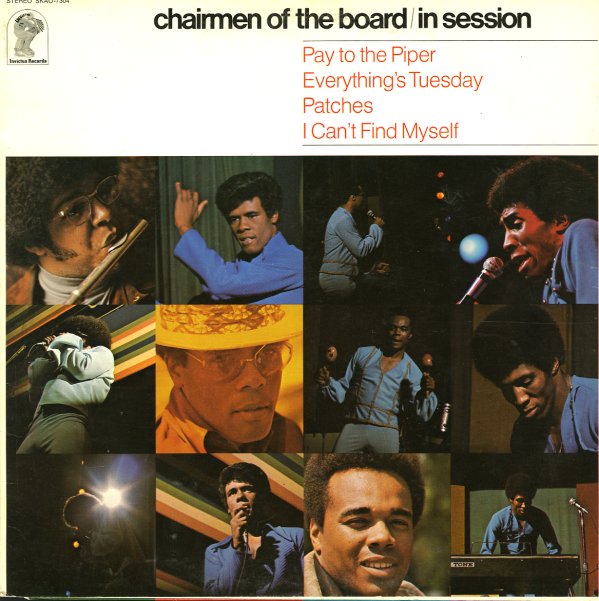 A killer album by the Chairmen of the Board! The record's their second – and although the "In Session" title, photos on the front, and liner notes all make it appear to be a live album, it's actually a studio session, with the same great Holland-Dozier-Holland production as the first! The album includes an amazing track called "All We Need Is Understanding", a jaunty groover with this funky organ at the beginning, and some killer vocals by General Johnson. It's one of the group's best tracks ever – and the record has plenty of other nice ones – like "Pay To The Piper", "Hanging On To A Memory", "When Will She Tell Me She Needs Me", and "Chairmen Of The Board". Plus, the record includes their great version of "Patches", which they wrote for Clarence Carter – already on their first album, but featured here again for some strange reason! Who cares, though – because we love the track!  © 1996-2022, Dusty Groove, Inc.
(Cover has some surface wear & aging. Name & notes in pen on cover and labels.)

Reaching Out
Invictus, 1973. Very Good+
LP...$24.99
It's a few years after Freda's big hit "Band of Gold", and she's recording here in a very different mode! The record is produced by Holland-Dozier-Holland, with arrangements by a number of different talents, like McKinley Jackson, Tony Camillo, and Michael Smith – and the overall ... LP, Vinyl record album

Aries
Invictus, 1972. Sealed
LP...$11.99
A rare solo effort from Danny Woods – a record cut away from Chairmen Of The Board during a stretch when the group had temporarily disbanded – and an excellent showcase for Danny's strength on his own! Woods is really wonderful here – with a proud, righteous quality that really ... LP, Vinyl record album

Dells (Greatest Hits)
Chess/MCA, Late 60s. Near Mint-
LP...$9.99
A collection of tracks recorded during the late 60s and early 70s – when the Dells were at their peak, recording at Cadet with arrangers and producers like Charles Stepney, Bobby Miller, and Don Davis. Titles include "Love Is Blue (I Can Sing A Rainbow)", "There Is", ... LP, Vinyl record album

Let's Put It All Together
Avco, 1974. Very Good+
LP...$11.99
Mid-period Stylistics, recorded after their association with Thom Bell and Linda Creed, and during the time that the group was handled by Hugo & Luigi. H&L do an ok job with them, and they've got Van McCoy handling arrangements to add a bit more soul to the mix – but the record is ... LP, Vinyl record album

Here I Go Again
Atlantic (UK), 1972. Near Mint-
LP...$16.99
Nice compilation that brings together some of the excellent lesser-known work that Archie and the group did for Atlantic in the late 60s! You may know their funky hit "Tighten Up" (not on this album), but after that, Archie and The Drells got into an excellent Philly soul vein, with ... LP, Vinyl record album