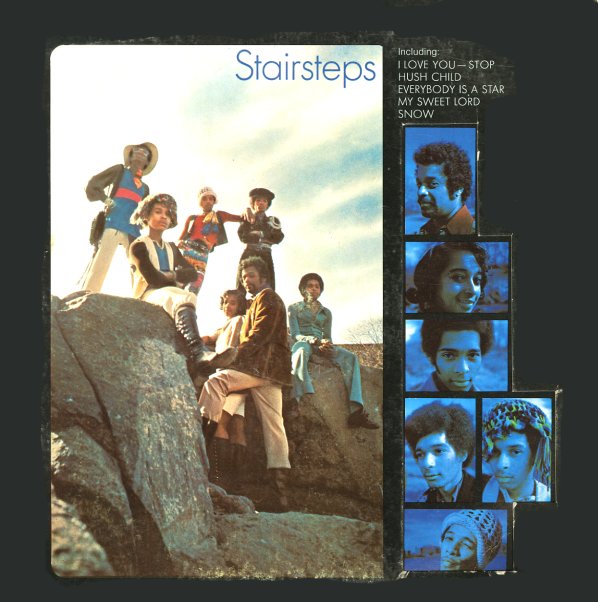 Great stuff from this legendary Chicago soul group! Although the band was trying to break out of their sweeter image as a young group (the cover has them looking pretty dope and wearing these wild pimpin' outfits), they're still pretty darn sweet and soulful here, with only a hint of the later rock-heavy sound they would try to experiment with. Tracks include the obvious follow-up to their hit "Ooh Child" (not on this album), titled "Hush Child", and with a similar sweet soul sound – plus Sly Stone's "Everybody Is a Star", and the cuts "Peace Is Gonna Come", "Snow", and "I Love You – Stop". Cool die cut cover, too!  © 1996-2021, Dusty Groove, Inc.
(Cover has a few creases on the die-cut.)

This Is It
Buddah, 1976. Very Good
LP...$4.99
A real stormer from Melba Moore – brilliantly-arranged dancefloor soul with beautiful lead vocals by Melba – on one of her best records of the 70s! Melba is straight-up amazing here, bringing genuine soul to feverish dancefloor gems and otherwise soaring numbers. This Is It was ... LP, Vinyl record album

Black Motion Picture Experience
Buddah, 1973. Very Good+
LP...$19.99
An album that tries to do a heck of a lot in such a short space – and turns out to be even better than you might guess! Few folks would try to take on the entire black motion picture experience of the 70s with a single record – but funky arranger Cecil Holmes does just that, and turns ... LP, Vinyl record album

Superfly TNT
Buddah, 1973. Near Mint- Gatefold
LP...$19.99
Some nice heavy Afro-funk grooves, courtesy of Osibisa, for this follow-up score to the original Superfly! The sound of the music is quite different than Curtis Mayfield's famous soundtrack – and there's lots of heavy bass and percussion, plus some additional arrangements by Michael Gibbs. ... LP, Vinyl record album