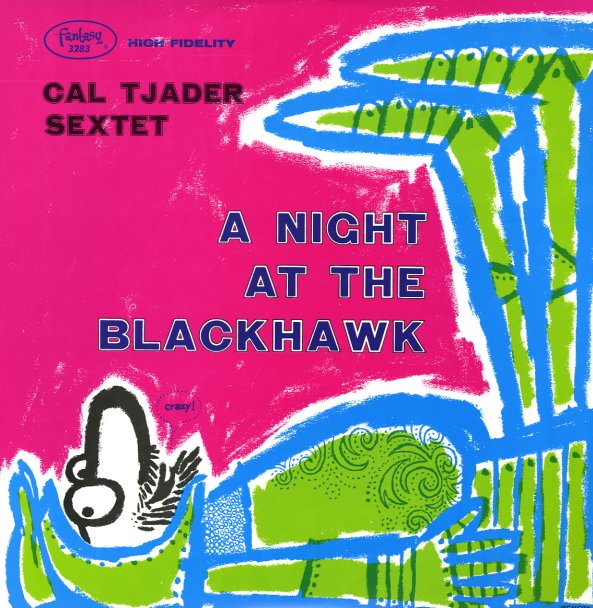 Night At The Blackhawk

One of Cal Tjader's best late 50s dates for Fantasy Records – thanks to some smoking tenor sax from Jose "Chombo" Silva! The album has Cal working in the very comfortable territory of San Francisco's Blackhawk Nightclub – in a combo that also features familiar players Vince Guaraldi on piano, Al McKibbon on bass, Willie Boby on drums, and Mongo Santamaria on congas – all musicians who'd previously helped Tjader hit some of his best Latin grooves! But the addition of Silva on a few tracks here really makes the set crackle – giving it a gutsy, soulful fee that you don't always get on some of Tjader's other records. Tracks are longish – and titles include the nice original "Bill B", plus jazzy versions of "I Love Paris", "Blue & Sentimental", and "Night In Tunisia".  © 1996-2023, Dusty Groove, Inc.
(Late 80s black vinyl OJC pressing. Cover has light wear, but looks great overall.)

A Fuego Vivo
Concord, 1982. Near Mint-
LP...$11.99 14.99
A Fuego Vivo is a live septet set with the latin vibes master out front of Mark Levine on keys, the great percussionist Panco Sanchez on congas, and Gary Foster on alto and flute. It's a pretty atypically frenetic set for such a late date – with wonderfully tight, yet still quite jamming ... LP, Vinyl record album

Concert On The Campus
Fantasy, Early 60s. Very Good
LP...$9.99 11.99
A nice early Cal Tjader set for Fantasy – featuring Cal's vibes set up in a piano and percussion mode – a bit like work by the George Shearing group, but with a hipper sound, and more of a firey Latin finish, thanks to percussion by the likes of Willie Bobo and Mongo Santamaria. Lonnie ... LP, Vinyl record album

Concert By The Sea
Fantasy, 1959. Very Good+
LP...$18.99
The crashing waves of the Pacific coast hardly seem like the serene setting you might want for the vibes of Cal Tjader – but this album works surprisingly well, and offers up Cal's combo in a Monterey live date, before the jazz festival really got going strong! The group's one that matches ... LP, Vinyl record album

Thundering Herd
Fantasy, 1974. Near Mint-
LP...$3.99
Great work from Woody – not as funky as some of his other 70s albums, but still a really excellent album with a much better sound than you'd expect! The group's filled with young hip players – most of whom we don't know, but who play with a lot of soul – and even Woody's pretty ... LP, Vinyl record album

Jazz At The College Of The Pacific (10 inch LP)
Fantasy, 1953. Very Good
LP...$14.99
Classic early live material from the Dave Brubeck Quartet – already humming along nicely with some great alto sax from Paul Desmond! The group's in fine form here – a bit more relaxed and open than on their Columbia recordings – with plenty of creative piano lines from Dave, ... LP, Vinyl record album

King Cobra
Fantasy, 1976. Near Mint-
LP...$2.99
Funky Woody from the 70s – an excellent and overlooked album, one that has Woody leading a great group with a fair bit of electric players, in a funky big band style that sparkles with the best of the genre! The group's filled with younger unknown players – but from the sound of the ... LP, Vinyl record album