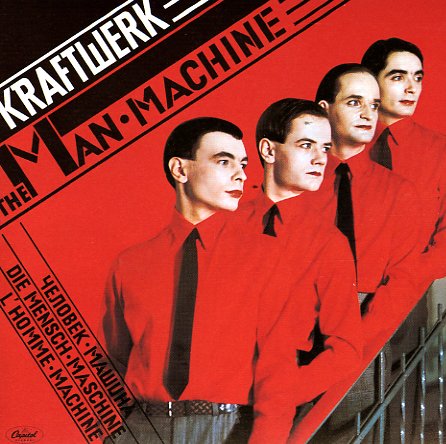 Man and machine – a perfect summation of the Kraftwerk genius, delivered perfectly on this classic late 70s set! The album's got a bit more punch than some of their previous efforts – almost a not towards the dancefloor at times, yet hardly the disco you'd get from other groups of the period – and more a prefiguring of the sounds of the future from various UK and European sources! There's some great electro moments that made the record a favorite for the New York scene in the early 70s – including some wicked vocoder bits, and tight beats on a few numbers. Titles include the excellent "The Model" – plus "The Man Machine", "Neon Lights", "The Robots", "Spacelab", and "Metropolis".  © 1996-2022, Dusty Groove, Inc.
(US pressing. Cover has some ring and edge wear and is lightly bent at the sides.)

Radio-Activity
Capitol, 1975. Very Good+
LP...$34.99
Spacey sounds from out of the ether – Kraftwerk's wonderful tribute to radio, spun out in the same spare electronics they used to give some love to the computer, too! The album's the first by the group to really work as a unified suite of tracks – building up wonderfully over the ... LP, Vinyl record album

Computer World
Warner, 1981. Very Good+
LP...$29.99 34.99 (CD...$7.99)
It's definitely a computer world when you're inside the mind of Kraftwerk – the machine made man, given a wonderful showcase here for the new decade! The sound is maybe a bit leaner and even more electronic than before – with the introduction of some digital elements, and a mix of ... LP, Vinyl record album