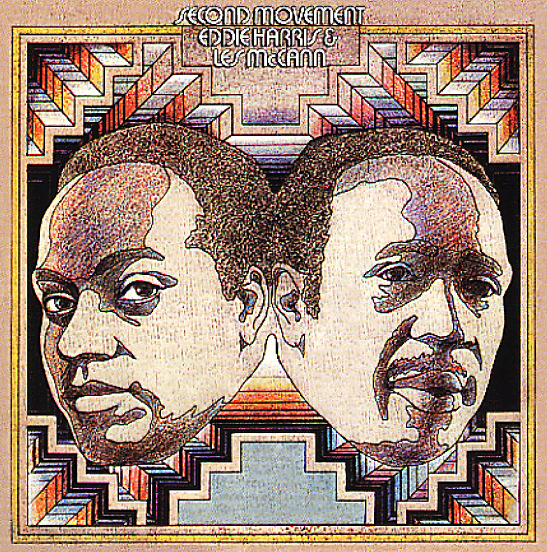 A massive batch of funky soul jazz – the Second Movement (to the first album Swiss Movement) of the collaboration of Eddie Harris and Les McCann! The vibe here is even freer, and hipper, than on the first set – with a host of long tracks that have Les really working the Fender Rhodes into some great grooves, as Eddie blows along some mean, mad Varitone with equal charm! Players include Bernard Purdie, Buck Clarke, and Cornell Dupree – and titles include "Saima", "Carry On Brother", "Universal Prisoner", and the brilliant sample cut "Shorty Rides Again"!  © 1996-2023, Dusty Groove, Inc.
(Broadway label pressing. Cover has some gloss peel down the opening.)

Silk & Soul
Prestige, 1965. Good
LP...$9.99
Brother Jack's organ is set amidst an amazing batch of orchestrations by Benny Golson, and the core of the group is Jack's combo with Red Hollway, George Benson, and Joe Dukes. Golson's arrangements are fantastic, and far from surpressing or overpowering the combo's funky jazz sound, they actually ... LP, Vinyl record album

Piano Player
Cadet, 1969. Good
LP...$2.99 (CD...$12.99)
One of Ramsey Lewis' best albums of the 60s – a killer Cadet record that stands right up there with classics like Maiden Voyage and Mother Nature's Son! As on those records, arrangements here are mostly by Charles Stepney, who comes up with that righteous blend of soul, strings, and jazz ... LP, Vinyl record album