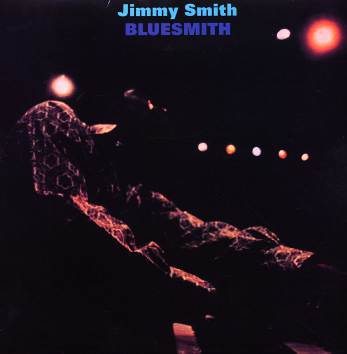 One of the hippest Jimmy Smith albums of the early 70s – a lean and mean, down and dirty, back to basics session for Verve – one that's got plenty of grit in the grooves! L:ike the Root Down album, this set is recorded live with a very stretched out feel – tracks that take Jimmy Smith back to the more open-ended styles of his roots, and get past some of the slicker notes of later years. There's not as much heavy funk as on Root Down, but the sound is still equally great – with plenty of sharp edges on the instrumentation, which includes Jimmy's Hammond alongside bass from Leroy Vinnegar, tenor from Teddy Edwards, guitar from Ray Crawford, drums from Donald Dean, and congas from Victor Pantoja. One title – "Blues For 3 + 1" – hits a great little groove that's almost bossa-funky – and other tracks include "Absolutely Funky", "Lolita", "Bluesmith", and "Mournin Wes".  © 1996-2021, Dusty Groove, Inc.
(MGM pressing. Cover has tape on the seams, light surface wear, and a name in marker.)

Breeze From The East
Verve, 1963. Near Mint- Gatefold
LP...$39.99
Beautiful album that pairs Cal's vibes with some "fake" Eastern arrangements by Stan Applebaum. Stan's arrangements have a sound that's both lush and swinging – and they soar in and out, letting Cal's Latiny vibes get all groovy sounding over the top. Includes a great version of ... LP, Vinyl record album