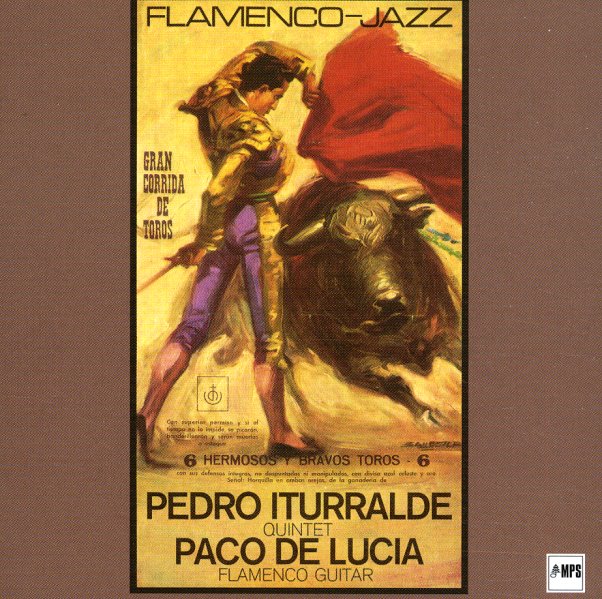 Really wonderful stuff – and a record that may well be even better than the previous flamenco jazz albums cut by Paco DeLucia and Petro Iturralde in Spain! This set is part of a key late 60s moment when the MPS label was experimenting with a blend of jazz and sounds from around the globe – and it's got a really open, freewheeling sound – and an even better realization of the ideas the pair had worked on previously. Tenorist Pedro Iturralde is stunning – opening up in these long Coltrane-like lines that are some of the best we've ever heard from him – and the rhythm section is wonderful, too – very modal, with bold lines from Paul Grassl on piano, Erich Peter on bass, and Paul Grassl on drums. Trombonist Dino Piana is also in the group – deepening up the sound – and the music parts at magical moments to allow for some rich guitar passages from the great Paco DeLucia – very young here, and filled with fire. Titles include "El Vito", "Valeta De Tu Viento", and "Cancion Del Fuego Fatuo".  © 1996-2022, Dusty Groove, Inc.
(Japanese pressing – with insert.)

Hamburger Idylle (aka A Jazz Tune I Hope)
MPS, 1978. Near Mint-
LP...$14.99
Pure brilliance from trombonist Albert Mangelsdorff – a player who may well have done more for his instrument than any other musician we can think of! The sounds here are amazing – not just familiar jazz modes, but also lots of strange tones, open sounds, and more – yet always ... LP, Vinyl record album

Orchestra 1 – Blue Flame
MPS (Germany), 1976. Near Mint-
LP...$29.99
One of three large group records that Francy Boland recorded after the breakup of the Clark/Boland Big Band, but one that has a feel that's very similar to the material by the classic CBBB. In fact, much of the personnel remains the same, and the group includes Benny Bailey, Tony Coe, Ronnie Scott, ... LP, Vinyl record album