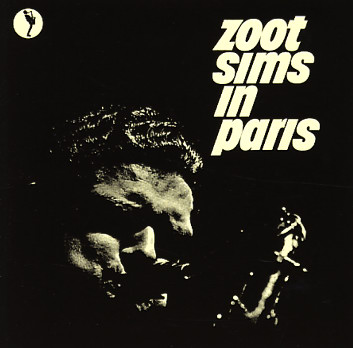 A rare gem from Zoot Sims – a slightly obscure session issued in the early 60s by United Artists! Producer Alan Douglas put together the record – and as with most of the Douglas-produced albums of the period, the set's got that little "something extra" that makes it stand apart from a lot of other albums by the artist from the time. The whole package isn't too complicated, and just features Zoot blowing easy with a laidback (unnamed) quartet in what seems to be a live session. The solos come fast and free, and with a strong uncluttered sensibility that you don't often hear on other Sims records from the same period. Titles include "Zoot's Blues", "On the Alamo", "A Flat Blues", and "You Go To My Head".  © 1996-2022, Dusty Groove, Inc.
(Grey label stereo pressing with 1A matrix and Bell Sound stamp, in a textured cover. Cover has light wear and aging.)

Passion Flower – Zoot Sims Plays Duke Ellington
Pablo, 1979/1980. Very Good+
LP...$8.99
Kind of an unusual session for Zoot Sims – one that features him as the main soloist in a batch of Duke Ellington material – played by a large group arranged and conducted by Benny Carter! Sims is still the main focus of the record – and his tenor gets plenty of solo space ... LP, Vinyl record album

Benny Golson & The Philadelphians (horse cover)
United Artists, 1958. Very Good
LP...$38.99
A killer set of hardbop tracks that shows what a great tenorist Benny Golson was during the late 50s! The session features Benny on tenor with other Philly-mates, like Lee Morgan, Ray Bryant, Percy Heath, and Philly Joe Jones – and the set's got all the tightness of a late 50's Jazz ... LP, Vinyl record album

Destry Rides Again
United Artists, 1959. Very Good-
LP...$24.99
One of the strangest Randy Weston albums you'll ever see – but a great one too! Here, the great modernist pianist/composer plays selections from the hit musical Destry Rides Again – an unusual choice, but one that he makes all his own thanks to some really inventive touches. Randy's ... LP, Vinyl record album

Up Tight!
Prestige, 1961. Very Good-
LP...$14.99
A great little session by Jug – cut after the late 50s blowing session years, and with a much tighter sound that's very much in the pocket! The record features two groups – one with Walter Bishop, Art Davis, and Art Taylor; the other with Patti Brown, George Duvivier, and Taylor ... LP, Vinyl record album

Suite For Flute & Jazz Piano
Columbia, 1975. Near Mint-
LP...$9.99
One of the most successful jazz/classical projects ever – and one that still holds up well over the years! LP, Vinyl record album