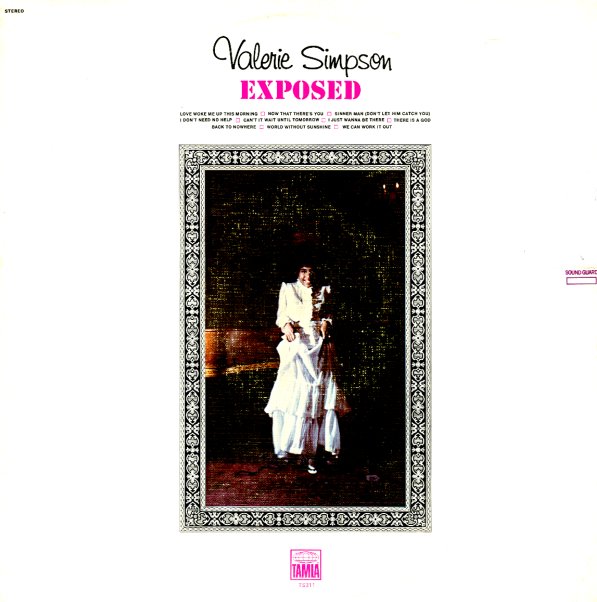 A classic early bit of soul from the Ashford & Simpson team – even though the record is billed under the name of Valerie Simpson as a solo act! Valerie sang all the tracks on the album, but she and Nick produced the record together – in a way that really sets the groundwork for their bigger fame to come in the 70s – but much rootsier overall! Paul Riser handles the arrangements, with that great touch that he was bringing to some of the best Motown work of the early 60s – that sense of expanded styles, but never in a way that just rehashed some of the previous Detroit styles, and instead almost reached for some of the more sophisticated sounds coming from the east coast and Chicago. Dennis Coffey handles the guitar solos, Jack Ashford plays percussion, and Joshie Armstead joins Nick and Valerie on backup vocals. Titles include "Sinner Man", "Can't It Wait Until Tomorrow", "I Don't Need No Help", "World Without Sunshine", and "We Can Work It Out".  © 1996-2023, Dusty Groove, Inc.
(Original UK pressing, in a flipback cover, with light surface & ring wear.)

My Cherie Amour
Tamla, 1969. Very Good+
LP...$29.99
Wonderful work from Stevie Wonder – one of his real standout albums of the 60s, and a set that's filled with majestic power all the way through! The title track was an instant hit, and the rest of the set follows through nicely with sounds that are way different than common Motown hits ... LP, Vinyl record album

Songs In The Key Of Life
Tamla, 1976. Very Good+ 2LP Gatefold
LP...$34.99 (CD...$4.99)
A sweet little double LP – one that had some folks saying that Stevie should have stayed away from the "2LP syndrome", but for us a real treasure with lots of hidden gems. Besides the hits "Isn't She Lovely" and "Sir Duke", which were more than enough to carry ... LP, Vinyl record album

Greatest Hits – From The Beginning
Tamla, 1960s. Very Good 2LP Gatefold
LP...$5.99
Like the sticker on the cover says – 2 record album, 22 hit songs! This one's got just about all you'd need from the early days of Smokey & The Miracles – perfect falsetto harmony soul that shaped a generation of singers, and which was some of Motown's greatest work in the early ... LP, Vinyl record album

Super Hits
Tamla, 1960s. Very Good+
LP...$24.99
Kind of an ultimate Marvin Gaye hits compilation – issued in 1970, with one of the most badass Motown covers of the time! The album's got a famous image of Gaye as a black Superman – flying high on the cover of a set that's filled with some of his best 60s work for Motown – and ... LP, Vinyl record album

Journey Through The Secret Life Of Plants
Tamla, 1979. Very Good+ 2LP Trifold
LP...$14.99
Very high concept work from Stevie Wonder! The record is, in fact, about the "secret life of plants" – partially used as a soundtrack for a film of the same name, but also acting as kind of a storybook in itself! Stevie's exploring a wide range of plant life and plant themes on ... LP, Vinyl record album

Fulfillingness' First Finale
Tamla, 1974. Very Good+ Gatefold
LP...$24.99 (CD...$4.99)
A fantastic 70s classic from Stevie Wonder – part of a great run of records in which he broke completely from his earlier Motown sound – and showed the world that he was one of the true musical visionaries of the decade! The righteous currents of his previous few albums are fully in ... LP, Vinyl record album

Smokey
Tamla, 1973. Very Good+
LP...$7.99
Fantastic solo work from Smokey Robinson – recorded a few years before his monumental Quiet Storm album, but with a very similar high level of quality! Willie Hutch co-produced the album with Smokey, and working with arrangements by Hutch and Gene Page, they transform Smokey's sound into a ... LP, Vinyl record album

Time Out
Tamla, 1969. Very Good+
LP...$6.99
Kind of a mixed bag of numbers from Smokey and the group – who are clearly searching around here for a new sound that will take them into the 70s, working in a number of different modes – all of them still pretty nice, thanks to the always-great vocal talents of the group. Titles ... LP, Vinyl record album