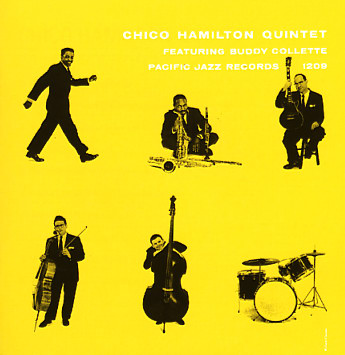 An archetypal record from the west coast scene of the 50s – a sublime batch of lightly grooving numbers from Chico Hamilton's famous early Quintet! The power here really comes from a triad of three players – reedman Buddy Collette, mentioned in the title and playing flute, alto, tenor, and clarinet; guitarist Jim Hall, whose spacious use of his instrument set new standards with this record; and cellist Fred Katz, often an unsung hero whose gentle sound shapes really helped bring a sense of tone and color to the group. Also featured is bassist Carson Smith, giving the same great sensitive accompaniment here he did in Gerry Mulligan's early quartet – and Chico himself is on drums, of course, but often playing with unusual timings and touches that really make for a lot more than conventional rhythm! Titles include "Blue Sands", "The Sage", "A Nice Day", "Buddy Boo", and "Spectacular" – as well as "Free Form", which is totally improvised – although in a way that's very different from any 60's track that would have the same sort of name!  © 1996-2020, Dusty Groove, Inc.
(Black label Pacific Jazz pressing with deep groove. Cover has light wear and aging, with small splits in the bottom seam.)

Chico Hamilton – Jazz Milestone Series
Pacific Jazz, 1950s. Very Good+ Gatefold
LP...$4.99
A 60s collection that brings together some of Chico's best early work for Pacific Jazz – including his groundbreaking Quintet, a group that completely redefined the sound of jazz on the west coast! The album's filled with playful tracks that feature Chico's unique rhythms next to ... LP, Vinyl record album