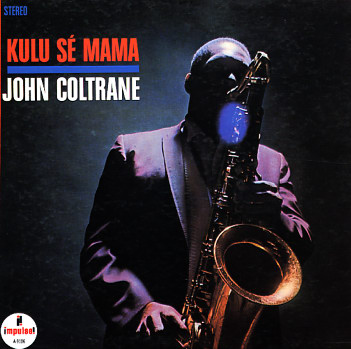 One of our favorite albums ever from John Coltrane – but a record that's sometimes eclipsed by the genius of A Love Supreme! The feel here is very similar to that one – long tracks that introduce a new mode of searching, spiritual jazz for the 60s – one that's performed by a core quintet with Coltrane, McCoy Tyner, Jimmy Garrison, and Elvin Jones – but which also features added players on the side-long title track! "Kulu Se Mama" is a tremendously bold statement in music – one that features a bit of spiritual vocals from Juno Lewis, plus added bass clarinet from Donald Garrett, tenor from Pharoah Sanders, and drums from Frank Butler. The two other tracks – "Vigil" and "Welcome" – are performed by a quartet, but are still equally great!  © 1996-2023, Dusty Groove, Inc.
(Orange & black label mono pressing with Van Gelder stamp. Cover has a small cutout hole and a very small bit of wear on the spine, but is quite nice overall.)