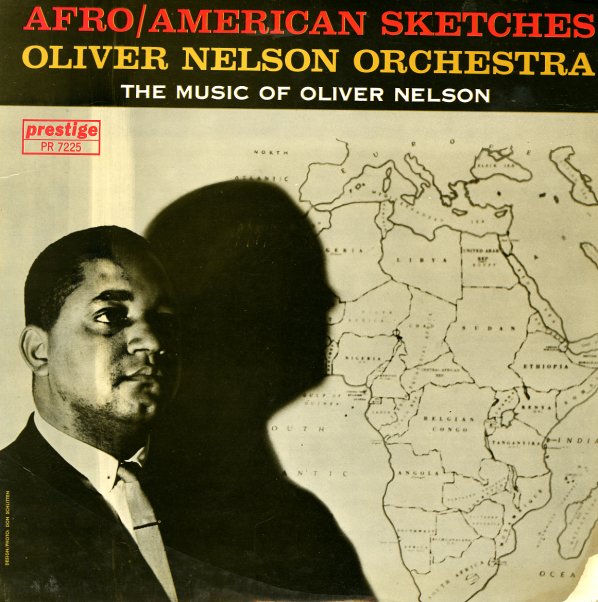 One of the first larger concept albums from Oliver Nelson – and a set that really marked a strong step forward as a jazz arranger! The album is one long suite – as you might guess from the title – with righteous themes that deal not just with rising independence in postwar Africa, but also the Civil Rights struggle in the US – performed by a superb lineup that includes Jerry Dodgion on alto and flute, Eric Dixon on flute and tenor, Joe Neman and Ernie Royal on trumpets, Melba Liston and Billy Byers on trombones, Patti Brown on piano, Art Davis on bass, and Ray Barretto on congas. Nelson is fantastic too – and blows tenor and alto with some fantastic moments. Passages of the suite include "Disillusioned", "Freedom Dance", "Emancipation Blues", and "Jungleaire".  © 1996-2021, Dusty Groove, Inc.
(Mono yellow and black label NJ pressing with deep groove and RVG stamp. Vinyl plays with surface noise and crackles. Cover looks nice however, with just a bit of wear at the opening and a small dent in the top seam.)

Blues & The Abstract Truth (80s pressing)
Impulse/MCA, 1961. Near Mint-
LP...$24.99
One of the all-time classics of early 60s mainstream jazz – and a beautiful record that showcases writing and arranging talents of Oliver Nelson! Nelson had been bumping around a variety of sessions before this one – as a leader, sideman, and arranger – but it was with this album ... LP, Vinyl record album

Blues & The Abstract Truth (profile cover)
Impulse, 1961. Near Mint-
LP...$29.99
One of the all-time classics of early 60s mainstream jazz – and a beautiful record that showcases writing and arranging talents of Oliver Nelson! Nelson had been bumping around a variety of sessions before this one – as a leader, sideman, and arranger – but it was with this album ... LP, Vinyl record album

Kennedy Dream – A Musical Tribute To John F Kennedy
Impulse, 1964. Very Good- Gatefold
LP...$5.99
A great little album – a lot better than you might think from the concept! After the death of JFK, Oliver Nelson penned this extremely strong tribute to the man – featuring snippets of speeches made by Kennedy during his time in office as president, used as bridges between jazz based ... LP, Vinyl record album

Power (Tower Of Power/More Power)
Prestige, 1969. Near Mint- 2LP Gatefold
LP...$14.99
A pair of great American albums from Dexter Gordon – back to back in a single set! First up is Tower Of Power – recorded at a time when Dexter Gordon certainly was a tower of power – as his lengthy 60s stay in Europe helped him to work work work, and season his playing ... LP, Vinyl record album