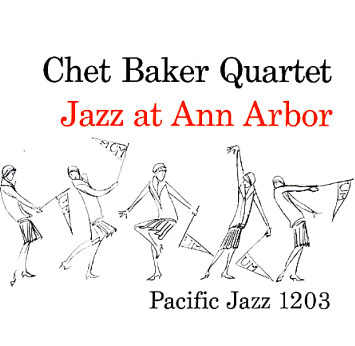 An excellent early album from Chet Baker – recorded with his classic quartet lineup that included Russ Freeman on piano – and done in conjunction with a concert recorded in Ann Arbor, Michigan – oddly promoted by Ollie McLaughlin, a legendary figure on the Detroit soul scene in the 60s! The album's a bit of a change from the usual Baker Pacific Jazz set – in that tracks are often slightly longer than usual – not all-out jams, but in the five minute range, with slightly extended soloing. Other members of the group include Carson Smith on bass and Bob Neel on drums – and titles include "Line For Lyons", "Lover Man", "Maid In Mexico", "Headline", and "Russ Job".  © 1996-2021, Dusty Groove, Inc.
(Mono black label pressing with deep groove and Demonstration stamp. Cover has surface wear, light aging, a large Demonstration stamp on front, small seam splits, and some transferred ink and a small stamp on back.)