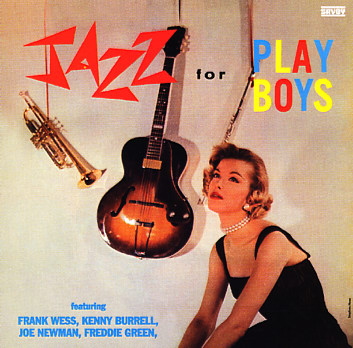 One of those classic 50s sessions in which a bunch of Count Basie players split off from the bigger group and do some great small combo work on their own! The album is leader-less in its billing – but only because all the players are so well tuned to each other, and have such a simpatico relationship that there's no need for egos to drive the record. Tracks are longish and more open than any Basie setting – and players include Frank Wess on flute and tenor, Kenny Burrell on solo guitar, Freddie Green on rhythm guitar, and Joe Newman on trumpet. Wess' solos are often out in the lead, but Burrell and Newman also get in some nice licks – and titles include "Pin Up", "Playboy", "Miss Blues", and "Blues For A Playmate".  © 1996-2021, Dusty Groove, Inc.
(80s SJ pressing. Cover has an index sticker on the spine.)

Trumpets All Out (Savoy)
Savoy, Mid 50s. Very Good
LP...$39.99
As you might guess from the title, the album's an all-trumpet affair, one that features 5 different players on the instrument – Art Farmer, Emmet Berry, Charlie Shavers, Ernie Royal, and Harold Baker – supported by spare rhythm from the trio of Don Abney on piano, Wendell Marshall on ... LP, Vinyl record album

Philosophy Of Urso
Savoy, Early 50s. Very Good+
LP...$33.99
One of the few albums ever issued as a leader by Phil Urso – a bright young tenor star in the 50s, known for his work with Chet Baker and Stan Getz! The album features Urso in 3 different settings – one with Getz alumni that include Bob Brookmeyer and Horace Silver, grooving hard on ... LP, Vinyl record album