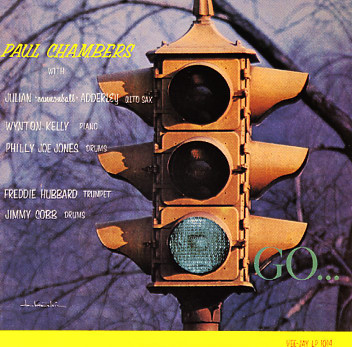 A rare non-Blue Note date as a leader from bassist Paul Chambers – and one of his hardest cooking dates in the studio! The session breaks out a bit from some of Chambers' more concept-based work of the time – and has him opening up strongly with an all-star group that includes Cannonball Adderley on alto sax, Freddie Hubbard on trumpet, Wynton Kelly on piano, and Philly Joe Jones on drums. The setting's a bit loose, almost a blowing session – and Chambers holds it together perfectly, almost acting as more of a sideman on the session, and letting the bigger-name soloists get plenty of space to do their thing! One of the all-time Vee Jay jazz classics – with titles that include "Just Friends", "I Got Rhythm", "Ease It", "Awful Mean", and "Julie Ann".  © 1996-2021, Dusty Groove, Inc.
(70s black label stereo pressing. Vinyl has a short click on "Ease It" and I've Got Rhythm".)

We Bring You Love
Vee Jay, Late 50s. Very Good+
LP...$4.99
A strange little record that's indicative of some of the unusual musical practices that were living side by side in a city like Chicago during the postwar years. McLawler and Otto play organ and violin, respectively – and they have a style that mixes jazz with kind of a classier instrumental ... LP, Vinyl record album