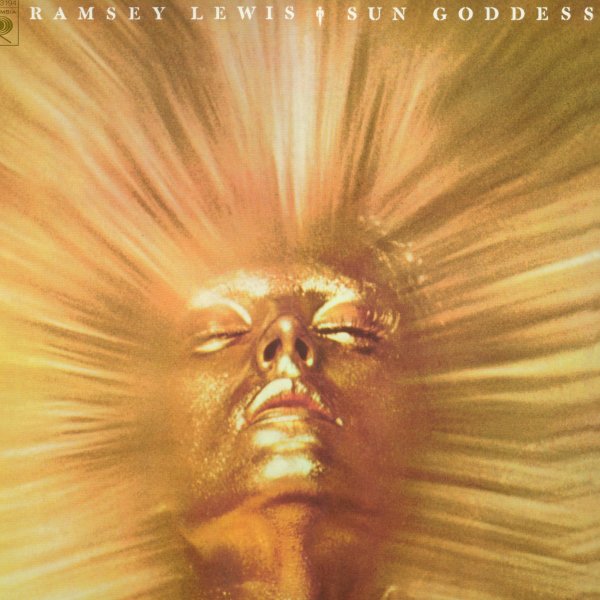 One of our favorite Ramsey Lewis albums ever – and a perfect summation of the genius that was brewing on the Chicago scene in the late 60s and early 70s! The album has Ramsey working strongly with Earth Wind & Fire – no surprise, given his close ties to Maurice White, who was the drummer in Ramsey's trio before starting his own group – and the shared relationship both artists had with producer Charles Stepney! The three were all key parts of the late 60s sound at Chess Records – but here, they've brought the same soulful energy to Columbia – working in a wider, more mature groove for the 70s – one that has Lewis' wicked Fender Rhodes lines stretching out strongly over tight, compressed, funky lines from EWF! The centerpiece of the set is the massive 7 minute "Sun Goddess", but there's lots of other nice ones like "Living For The City", "Gemini Rising", and "Jungle Strut". Funky, electric, and sublimely wonderful all the way through!  © 1996-2021, Dusty Groove, Inc.
(Cover has some ringwear in back, in nice shape otherwise!)

Hang On Ramsey
Cadet, 1965. Very Good
LP...$9.99
Easily one of Ramsey Lewis' most successful records – featuring the hit soul jazz style that he forged with the Young/Holt rhythm combo, honed to perfection before a live crowd at The Lighthouse in Hermosa Beach. The record's a key part of Ramsey's live recorded output – showing the ... LP, Vinyl record album

Piano Player
Cadet, 1969. Very Good+
LP...$14.99
One of Ramsey Lewis' best albums of the 60s – a killer Cadet record that stands right up there with classics like Maiden Voyage and Mother Nature's Son! As on those records, arrangements here are mostly by Charles Stepney, who comes up with that righteous blend of soul, strings, and jazz ... LP, Vinyl record album