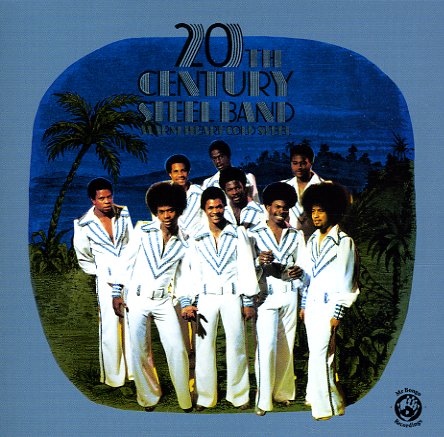 One of the greatest steel band records ever – and a hip hop sample classic from way back! Sure, there were other hip steel bands back in the 70s – but nobody else ever got as far as 20th Century – ending up on a major label, cutting some key funky covers, and crossing over with their massive "Heaven & Hell" – a cut that was DJ Red Alert's theme song in the old days! The group have a wonderful sound – mixing familiar steel band modes with bits of American funk – and creating a unique hybrid that's way more than just reworked covers, or simple copycat styles. In addition to the classic "Heaven & Hell", the set also features versions of "Love's Theme", "Shaft", "Papa Was A Rolling Stone", and "Standing In The Shadows Of Love" – plus the cuts "Lazy Days", "Endless Vibrations", "No 1", "Never Keep Secrets", "We've Got To Work Together", and "Dance Away".  © 1996-2020, Dusty Groove, Inc.
(Cover has a cut corner.)

Fans
Island, 1984. Near Mint-
LP...$2.99 (CD...$3.99)
After his Duck Rock/Buffalo Scratch days, this was Malcolm McLaren's next project – an attempt to update opera into a post-disco, hip-hop inflected dancefloor sound. The groove takes electronic beats and layers vocals and washes of sound over the top – presenting famous vocal passages ... LP, Vinyl record album