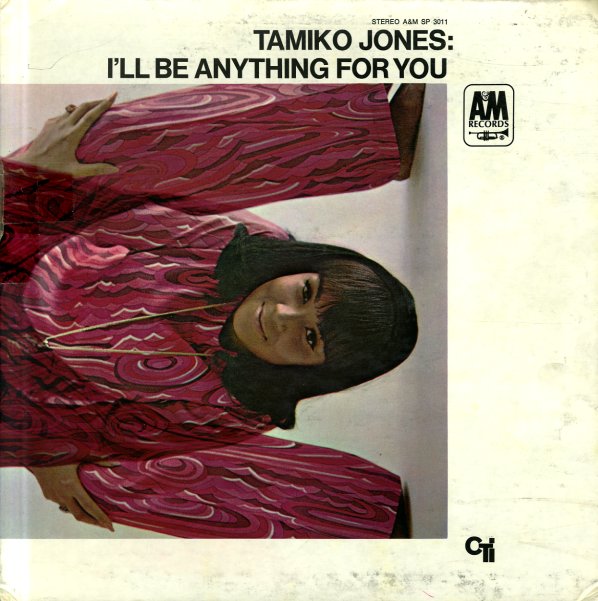 Fantastic work from Tamiko Jones – one of the more enigmatic soul singers of her generation! Tamiko could always handle a number of styles – and on this set, she moves between jazz and deep soul, working through a set of tracks that were recorded at either Sam Phillips in Memphis, or Rudy Van Gelder's famous jazz studio in New Jersey. Arrangements are by Teacho Wiltshire, Horace Ott, and Artie Butler – and Solomon Burke makes a guest appearance on the track "Try It Baby". Other tunes include "Where Are They Now?", "Black Is Black", "Ya Ya", "Suddenly", "This Time Tomorrow", and "Please Return Your Love To Me".  © 1996-2022, Dusty Groove, Inc.
(White label stereo promo. Cover has some ringwear, aging, a promo sticker on front, and some peeling of the finish and a name in pen on back.)

Right On Time
A&M, 1977. Very Good+
LP...$24.99
A funky classic from the Brothers Johnson – sweet funky soul, done with a polish few could match! The pair are still working with Quincy Jones at this point, and the record's filled with lots of tight jazzy grooves that certainly show Quincy's touch – and which set the record apart ... LP, Vinyl record album

Light Up The Night
A&M, 1980. Very Good+ Gatefold
LP...$9.99
More hit magic from the Brothers Johnson – still working with Quincy Jones at this point, and virtually setting up the blueprint for jazzy soul in the 80s! Backings are by an all-star team, and Rod Temperton's helping out Quincy with arrangements – going for that snapping groove ... LP, Vinyl record album

You & Me
A&M, 1980. Very Good
LP...$9.99
Great work from the wonderful Rockie Robbins – a smooth soul singer who cut some great sides at the start of the 80s, but who hardly ever gets his due! Bobby Martin's working with Rockie on this effort – giving the set that warmly gliding mode that made Martin's productions some of the ... LP, Vinyl record album

Live At The Bottom Line
CTI, 1979. Very Good+ Gatefold
LP...$5.99
A live set from the great Patti Austin – but done at a level that's every bit as tight as her studio work from the time! Patti's in a perfect balance between jazz and soul here – and works with sweet arrangements from Dave Grusin and Leon Pendarvis – the latter of whom also leads ... LP, Vinyl record album

Gist Of The Gemini
A&M, 1976. Near Mint- Gatefold
LP...$7.99 (CD...$13.99)
His hair's getting longer and his music a bit more flowing and dramatic – but Gino Vannelli's still going strong here, really opening up in the shine of his own mid 70s pop brilliance! The record's slightly more ambitious than some of Vannelli's earlier efforts – especially on side two' ... LP, Vinyl record album

Sun Down Lady
A&M, 1972. Very Good+
LP...$14.99
The beautiful first solo album by Lani Hall – recorded after years of work with Sergio Mendes in the Brasil 66 group – and done in a style that certainly reflects her great vocals with that ensemble, yet which also expands her sound tremendously! The set was arranged and produced by ... LP, Vinyl record album

Beyond
A&M, 1980. Sealed
LP...$7.99
An incredible later record from Herb Alpert – working in a soulful funky fusion mode that really is well beyond the style that made him famous in the 60s! We love the easy breezy 60s sound of Herb & The Tijuana Brass too, but he really stepped up his game in exciting ways on records like ... LP, Vinyl record album

As Serious as a Heart-Attack
A&M, 1971. Near Mint- Gatefold
LP...$43.99
Wild wicked funky stuff, from the man who gave the world Sweet Sweetback's Badass Song, and his son Mario! Melvin's wearing braids and a shirt that says "Rated X By An All-White Jury" on the front – and the grooves on the album have the same sort of confrontational vibe. Doug Carn ... LP, Vinyl record album