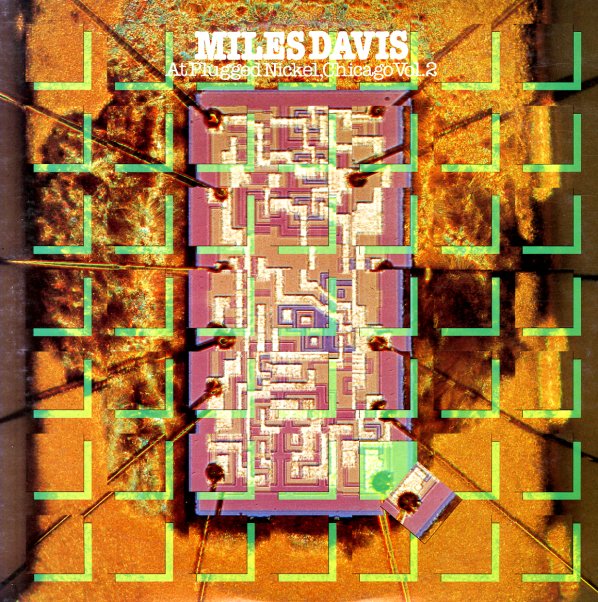 This stunning live set has been hailed by many as one of the finest moments of Miles' mid 60s career – music played with a frenetic energy that even blows away the famous studio sessions of the time! The group here is a landmark lineup – young modernists Wayne Shorter on tenor, Herbie Hancock on piano, and Tony Williams on drums – all reaching out to really increase their craft, and work through new ideas alongside Miles' trumpet. This second volume includes "Round About Midnight", "Stella By Starlight", All Blues", and "Yesterdays" – and the material is from December 22 and 23, 1965. Pressed up on nice hard Japanese wax, with a weird computer image on the cover!  © 1996-2023, Dusty Groove, Inc.

Miles Davis (Everest) (aka Many Miles Of Davis)
Charlie Parker/Everest, Late 40s. Near Mint-
LP...$9.99 11.99
Early bop sides, not led by Miles as you might imagine from this package, but featuring him. We're not entirely certain of the origin of these recordings, but they are at least contemporaneous with the Savoy sides Miles was cutting with Bird, and according to the notes, feature Charlie Parker, ... LP, Vinyl record album

Sorcerer
Columbia, 1967. Near Mint-
LP...$99.99 (CD...$4.99)
Another bold new direction for the legendary Miles Davis Quintet of the 60s – a set that has some of the angular styles of earlier albums, but also a bit more of the flowing grace to come in the electric years! A key illustration of this is the leadoff track "Prince Of Darkness" ... LP, Vinyl record album

Miles Ahead
Columbia, 1957. Very Good
LP...$24.99
A masterful meeting of two 50s modern jazz talents – the trumpet of Miles Davis balanced with the arrangements of Gil Evans – with results that have made the album one of Miles' greatest ever! The sound here is completely sublime – as Davis gets all chromatic and spooky over ... LP, Vinyl record album

Good Vibes
51 West/CBS, 1979. Near Mint-
LP...$7.99
Forget everything you know about Lionel Hampton – because this is a must-have funky 70s session! The set was cut with an electric big band, and it features long tracks that groove like prime mid 70s MPS work – vibes out front on the solos, and the band grooving and vamping in a style ... LP, Vinyl record album

Miles At Newport
CBS (Netherlands), 1956/1958/1961. Near Mint-
LP...$19.99
Good material, even if the set is kind of a mish-mash of older tracks! The real strength of the set is the material from 1958 – recorded live at Newport Jazz Festival, with a group that includes Miles, Coltrane, and Cannonball Adderley. Tunes from that one include "Straight No ... LP, Vinyl record album