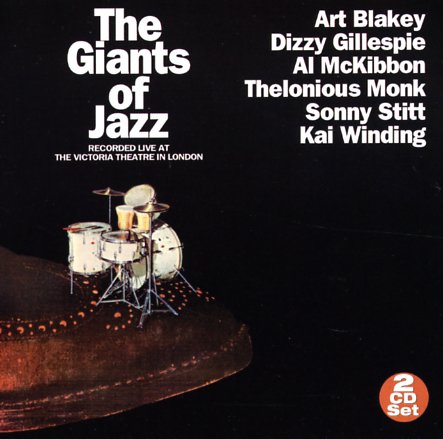 Giants Of Jazz – Recorded Live At The Victoria Theatre In London

This session shouldn't work, but it does – and beautifully! By all means, an album that includes Diz, Art Blakey, Monk, and Sonny Stitt playing together should be a first-rate snoozer, with hackneyed performances of common-denominator material that they can all get their hooks around – but instead, it's an amazing bit of work that has all players hitting some of their best moments of the 70's! Diz has that great deep 70's funk sound in his trumpet, Stitt's solos are razor sharp, and Blakey's drums have a good snap to them, and were recorded extremely well, despite the fact that this was a live session. All tracks are long, and the record includes great versions of "Tin Tin Deo", "Night In Tunisia", "Allen's Alley", "Blue Monk", "Woody N You", and "Tour De Force".  © 1996-2021, Dusty Groove, Inc.
(Green and red Rockefeller label pressing. Cover has a small cutout notch.)