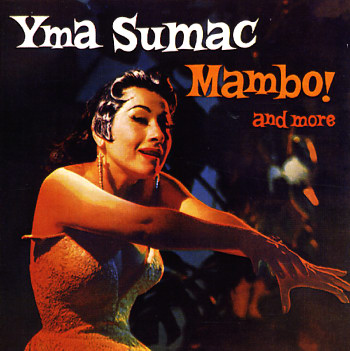 Quite possibly our favorite album ever by the enigmatic Yma Sumac – thanks to some lively arrangements by Billy May, who gives the set a swinging jazzy groove! As you might guess from the cover, the style here is more in a Latin jazz mode than some of Yma's other more ethereal work – and that style turns out to be a wonderful fit for Sumac's incredible vocals – creating a batch of driving tunes that swing nicely, yet still have a spooky exotic sound on the top! Titles include "Bo Mambo", "Taki Rari", "Goomba Boomba", "Malambo No 1", and "Five Bottles Mambo".  © 1996-2022, Dusty Groove, Inc.
(80s abridged light blue label pressing, in a cover with barcode. Cover has a partially unglued seam and light surface wear.)