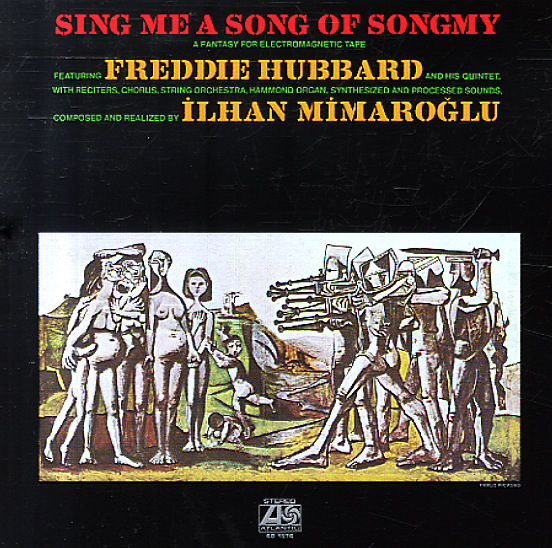 Sing Me A Song Of Songmy

One of Freddie Hubbard's wildest records ever – a really unique experiment with electronics, and a set that sounds way different than his other albums for Atlantic, Blue Note, or CTI! The key factor here is experimentalist Ilhan Mimaroglu – who adds lots of electronics and processed sounds to the set – blended with Freddie's more soulful lines on trumpet – to create a style that's almost a jazz version of musique concrete! In fact, at times, you forget that Hubbard's playing at all, as the wash of noise overtakes the force of some of his solos – and titles include "Threnody For Sharon Tate", "The Crowd", and "What A Good Time For Kent State".  © 1996-2022, Dusty Groove, Inc.
(Cove has a small cutout notch, but looks nice overall.)

Super Blue
Columbia, 1978. Very Good+
LP...$5.99 (CD...$19.99)
A sweet late 70s set from Freddie Hubbard – a slight move away from some of his highly-electric sides of the CTI years, yet one that still has some of the most soulful qualities of that work! Freddie's trumpet has a nicely spacious quality throughout – one that's flowing, and almost ... LP, Vinyl record album

Polar AC
CTI, 1975. Very Good Gatefold
LP...$6.99
Warm and wonderful work from Freddie Hubbard – a killer of an album recorded for CTI, and one of his most soulful efforts for the label! The album's got a bit more of a human heart than some of the more cosmic sessions Freddie cut at the time – a bit more contemplative and ... LP, Vinyl record album

Liquid Love
Columbia, 1975. Very Good
LP...$7.99
Electric funk from Freddie Hubbard – a great 70s session that has him bringing in a bit more soul to the mix than usual! Things are a bit tighter here than on the CTI sides, but still pretty open and fluid – almost in a Donald Byrd mode with Larry Mizell, given the fuller backings on ... LP, Vinyl record album

Night Of The Cookers Vol 1
Blue Note, 1965. Very Good+
LP...$58.99 (CD...$18.99)
A landmark set for Blue Note – one that features Freddie Hubbard working in raw, firey, freewheeling territory – given space that few other players at the label were getting at the time! The two volume set features tracks recorded live at Club La Marchal in Brooklyn – and have ... LP, Vinyl record album