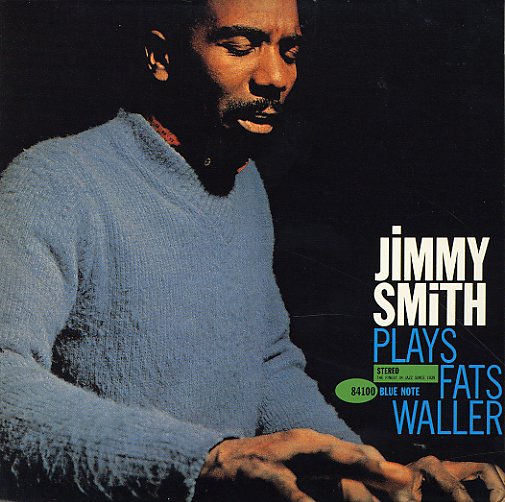 A surprisingly nice little album – a Jimmy Smith Blue Note session dedicated to Fats Waller, one of the first jazz musicians to work out his skills on the organ! Jimmy's working with a tight trio that includes Quentin Warren on guitar and Donald Bailey on drums – and although Waller never wowed anybody on the instrument in the same way that Smith did, he did come up with a nice way of getting a good sound out of the instrument – one that Jimmy rightly acknowledges here, then takes to the next level! The album features familiar tunes from the Waller songbook, but the performance is definitely prime Jimmy Smith on Blue Note – a set with titles that include "Lulu's Back In Town", "Honeysuckle Rose", "Ain't Misbehavin", "I've Found A New Baby", "Ain't She Sweet", and "Squeeze Me".  © 1996-2022, Dusty Groove, Inc.
(70s white b label pressing. Cover has a cutout hole and light wear.)

Jimmy Smith Plays The Standards
Blue Note/Sunset, Late 50s. Very Good
LP...$1.99 2.99
Early Jimmy Smith work for Blue Note – packaged together here as a "standards" collection and issued on Liberty's Sunset label in the late 60s! The collection offers little in the way of session details – clearly an attempt to pass it off as new material – but it does ... LP, Vinyl record album

Midnight Special
Blue Note, 1960. Very Good-
LP...$24.99
A perennial favorite in the Jimmy Smith catalog for Blue Note – and a smoking little set that has Jimmy's Hammond grooving nicely alongside tenor from Stanley Turrentine and guitar from Kenny Burrell! Only Donald Bailey's drums remain from Jimmy's regular trio, but that shift is fine, given ... LP, Vinyl record album

Bashin' – The Unpredictable Jimmy Smith
Verve, 1962. Good
LP...$1.99
One of Jimmy Smith's biggest albums of the 60s – and a classic Verve pairing of his lean Hammond organ solos with the fuller, hard-swinging arrangements of Oliver Nelson! Nelson is working here at the height of his powers – backing Smith with a large group, but in a way that only seems ... LP, Vinyl record album

Who's Afraid Of Virginia Woolf?
Verve, 1964. Very Good Gatefold
LP...$8.99
A real treasure, and a record that may well be our favorite Jimmy Smith album for Verve – a masterful meeting of his smoking Hammond work with some swingingly sophisticated arrangements by Oliver Nelson and Claus Ogerman! Both Nelson and Ogerman bring a fuller spectrum of horn work to the ... LP, Vinyl record album