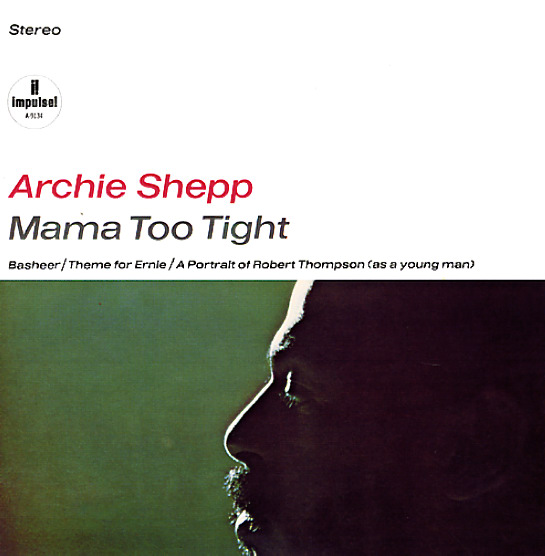 Growing brilliance from the young Archie Shepp – a record that's not just about Archie's own amazing work on the tenor, but also his keen modern vision as a leader! The combo here is an ensemble that features some of the hippest modernists of the 60s – Roswell Rudd and Grachan Moncur on trombone, Perry Robinson on clarinet, Howard Johnson on tuba, Charlie Haden on bass, and Tommy Turrentine on trumpet – making a rare non-bop appearance here, and further enforcing our already-high estimation of his talents! The style's somewhat in the "new thing" mode of the period, but it's also a bit more tightly arranged too – almost hitting Mingus-like modes for the bigger ensemble – balancing the force of the group together with very free, bold solo impulses from the players. Side one features the extended "Portrait Of Robert Thompson (As A Young Man)" – and side two features "Mama Too Tight", "Theme For Ernie", and "Basheer".  © 1996-2021, Dusty Groove, Inc.
(Rainbow label stereo pressing. Cover has some ring and edge wear and a small cutout hole.)

Impulse Years
Impulse, 1960s. Very Good 2LP Gatefold
LP...$6.99
Most of the tracks on this 2 LP set are not from Jones' solo records but rather songs under the direction of others, mainly John Coltrane but also Frank Foster and Sonny Rollins. Some of the Coltrane titles are the drum solo from "Pursuance", "Impressions", "Your Lady" ... LP, Vinyl record album