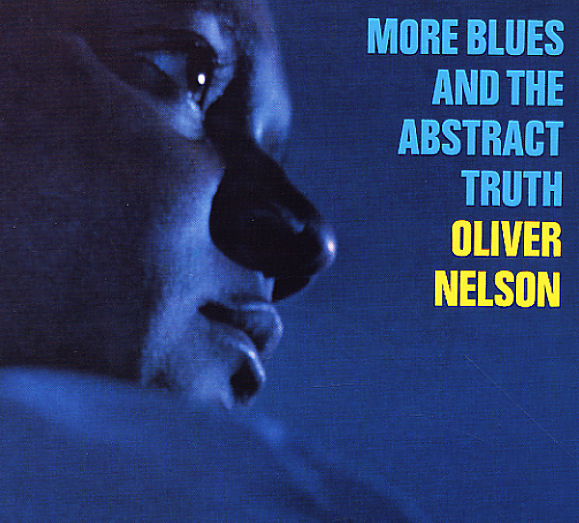 Oliver Nelson's follow-up to his classic Blues & The Abstract Truth session for Impulse – and like that one, a tremendous little album – filled with deep tones and wonderful colors in sound! The group here's a bit larger than before – an ensemble that includes Phil Woods on alto, Ben Webster on tenor, Thad Jones on trumpet, Pepper Adams on baritone, Roger Kellaway on piano, Richard Davis on bass, and Grady Tate on drums. The album includes some superb original compositions by Nelson – just the kind of overlooked jazz numbers that make the set great – and as with most of his arrangements from the time, there's a perfect balance between group force and intimate solo space! Titles include "The Critic's Choice", "Blues & The Abstract Truth", "One For Bob", and 2 versions of Dave Brubeck's "Theme From Mr. Broadway".  © 1996-2022, Dusty Groove, Inc.
(80s MCA pressing, in a non-gatefold cover with barcode. Cover looks great overall, with minimal wear.)

Full Nelson
Verve, 1963. Very Good Gatefold
LP...$14.99
Excellent work from one of our favorite arrangers! Nelson was a super-hip super-soulful genius who crafted some of the best charts in the 60s. He managed to work in a great amount of jazz where other arrangers would leave things cold – and on a record like this he manages to make a large ... LP, Vinyl record album

New Thing At Newport
Impulse, 1965. Very Good Gatefold
LP...$49.99
An essential piece of 60's avant garde jazz that often gets overlooked because the album is split between two different leaders – but with John Coltrane and Archie Shepp at the helm, what leaders they be! Shepp leads a quartet that includes Bobby Hutcherson on vibes, Barre Phillips on bass, ... LP, Vinyl record album

Death & The Flower
Impulse, 1974. Near Mint- Gatefold
LP...$15.99
Really wonderful early work from Keith Jarrett – a spiritually-driven session that's free from the cliches of his later work! The album's a spectacular group effort – one that has Jarrett playing piano, percussion, and sax – in an ensemble that also includes Dewey Redman, Charlie ... LP, Vinyl record album

Ballads
Impulse, 1962. Near Mint- Gatefold
LP...$34.99 (CD...$3.99)
A perennial favorite in the John Coltrane catalog – a beautiful set of standards, handled in a warm laidback style – but which still has some of the depth of soul that John Coltrane brought to his more experimental work on Impulse Records! The album's a classic introduction to the ... LP, Vinyl record album

Crescent
Impulse, 1964. Near Mint- Gatefold
LP...$39.99 (CD...$6.99)
Sharp-edged John Coltrane at his best – a record that we'd rank right up there with Love Supreme, and which is a key transition point in Coltrane's musical ideas! There's a very strong edge to Coltrane's tone here – and even on the mellower ballads, he plays with a sound not always ... LP, Vinyl record album

Brand New Swinging Together Again – The Great Kai & JJ
Impulse, Early 60s. Near Mint- Gatefold
LP...$14.99 (CD...$1.99)
The famous 50s team of JJ Johnson and Kai Winding are reunited strongly here – after working alone for several years on their own projects! The groove here is a bit more open and less arranged than some of the pair's earlier projects – mostly just two trombones in the lead, soloing ... LP, Vinyl record album

Point Of Departure
Impulse, 1963. Very Good+ Gatefold
LP...$16.99
A great record – and one that's filled with so many wonderful little moments! The whole thing's a very cool, very off-beat set of jazz tracks recorded by vibist Gary McFarland, with a group that includes Jimmy Raney on guitar, Richie Kamuca on tenor, and Steve Swallow on bass – a ... LP, Vinyl record album

On A Clear Day
Impulse, 1966. Very Good Gatefold
LP...$14.99
One of the best Shirley Scott albums ever – a wonderfully groovy little set that seems to stand head and shoulders above some of her other trio dates of the 60s! Shirley really hits a nice clean groove here – a sense of tone we don't always hear this beautifully on earlier Prestige ... LP, Vinyl record album

Additions To Further Definitions
Impulse, 1966. Near Mint- Gatefold
LP...$24.99
A great example of the cool, classy swing that Benny Carter hit in the 1960s – a groove that was more regularly brought to backings for standout singers of the time, but which also works beautifully here in an instrumental mode! Carter's alto sax is at the top of the charts, but the album's ... LP, Vinyl record album