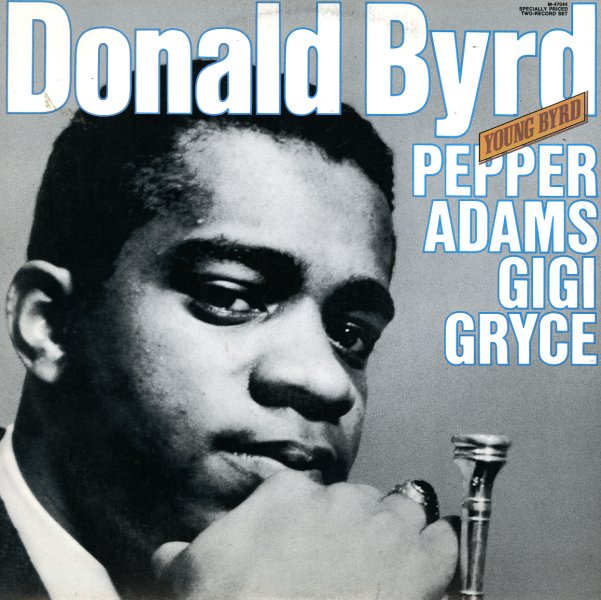 Milestone reissue that brings together 2 late 50's sessions by Donald Byrd! 10 To 4 At The 5 Spot was one of Byrd's partnerships with Pepper Adams – and is tremendous work from saxophonist Pepper – quite possibly one of his most hard-blowing sets on record! The album's a live date, recorded at the legendary Five Spot – and the group here is a swinging one with plenty of soul jazz touches – a combo that includes a young Bobby Timmons on piano, plus Donald Byrd on trumpet, Doug Watkins on bass, and Elvin Jones on drums – all playing together at the height of their youthful powers! But even amidst all those heavyweights, Pepper Adams is clearly the star of the set – playing with a tone that's unbelievable – almost more tenor-like than a baritone sax, and filled with feeling throughout, even on the mellower moments. Donald Byrd sits out on one track, leaving Adams to dominate the ballad "You're My Thrill" – but he returns to the fold in tight formation on versions of "Hastings Street Bounce", "Yourna", "Tis", and "The Long Two/Four". Gigi Gryce & The Jazz Lab Quintet features a group led by Gigi Gryce running down nice hard bop numbers. There's no dry academic performances here, not that you'd guess that from the line-up, but the title kind of leads you in that direction. Donald Byrd and Gryce are playing nice and hard up front, with Wade Legge on piano, Wendell Marshall on bass and Art Taylor on drums cooking nicely in the rhythm section. The tracks include Legge's "Geraldine" and Gryce's "Minority" plus "Love For Sale", "Zing Went The Strings Of My Heart", "Straight Ahead", and "Wake Up!".  © 1996-2023, Dusty Groove, Inc.
(Mid 70s issue. Cover has light wear and a cut corner.)

Inner Voices
Milestone, 1977. Near Mint-
LP...$9.99
A beautifully full session from McCoy Tyner – one recorded with added horns and voices, and very much in the mode of some of Horce Silver's best 70s experiments for Blue Note! The sound is as bold, dynamic, and soulful as other Tyner albums from the time – and the added elements really ... LP, Vinyl record album

Trav'lin' Light (Soulmates plus bonus tracks)
Milestone, 1957/1963. Very Good+ 2LP Gatefold
LP...$5.99 7.99
A 2LP set that features tracks from the original Soulmates album by Webster & Joe Zawinul – plus a few unreleased tracks! Despite the fact that Joe Zawinul is best known to the work for his funky keyboard work with Cannonball Adderley (or Weather Report), this early album that pairs him ... LP, Vinyl record album