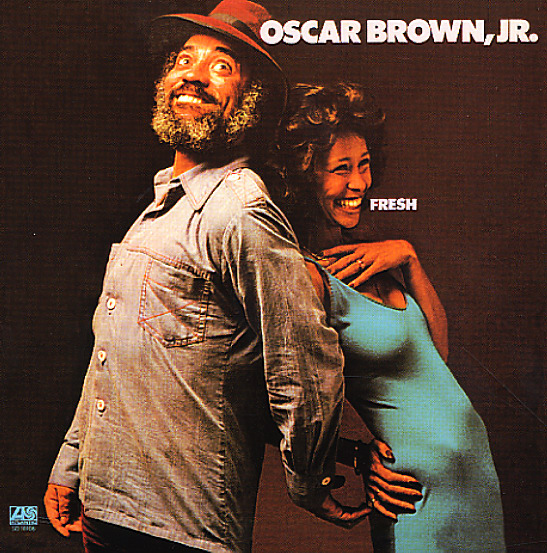 Oscar Brown moves into a funky 70s mode – working here with some great soul-based arrangements by Chicago soul legend Richard Evans! There's lots of funky clavinet grooving on the record by Tennyson Stephens and Marvin Yancy – and other players include Chess/Cadet session groovers, like Henry Gibson, Phil Upchurch, and Art Hoyle. The record was recorded in Chicago and produced by Jerry Butler – and it's clearly one of his efforts from the days when Jerry was dipping into the hip Chicago underground of the early 70s. Oscar reprises a number of classics – like "Hazel's Hips" and "But I Was Cool" – and the album includes some newer tunes like "Rilly?", "Ghetto Scene", and "Bull 'Bleep'", all a bit more righteous than before.  © 1996-2022, Dusty Groove, Inc.
(Cover has light wear, a cutout notch, promo sticker, and index label.)

Sin & Soul
Columbia, 1960. Very Good
LP...$6.99 (CD...$5.99)
Trend-setting vocal work from Oscar Brown Jr – one of the hippest singers of his generation, and a vocalist who really took things to the next level in the 60s! Brown's got a sound that's partially influenced by the vocalese of Eddie Jefferson, Jon Hendricks, and other singers of the 50s ... LP, Vinyl record album

Brother Where Are You
Atlantic, 1973. Sealed
LP...$9.99
Sweet 70s funk from the great Oscar Brown – quite a change from his jazz-based work of the 60s, but a great new sitting for all of his wonderful wit and warmth! Brown's still a hell of a songwriter, and one with a very socially-conscious eye – sharper here than before, with lots of ... LP, Vinyl record album