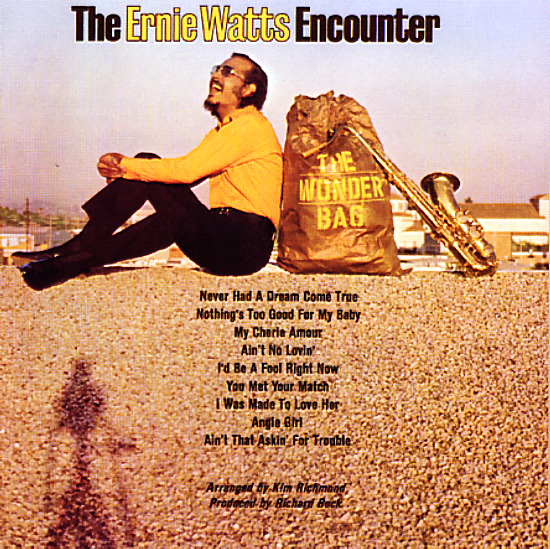 An excellent early album from Ernie Watts – one that has him taking on the music of Stevie Wonder with very groovy results! The sound here is quite different than the smoother fusion of Ernie's later years – and instead, there's a rollicking soul jazz groove to most numbers – one that features Watts' sax work alongside piano from Joe Sample, guitar from David T Walker, drums from Paul Humphrey, and congas from Francisco Aguabella! The tracks are short and plenty darn groovy – almost a west coast take on the sax-heavy Motown grooves of Jr Walker, but given a slightly hipper touch too. Some of the best elements of the LA scene come into play on the session – and the arrangements by Kim Richmond feature fuller backings on a few tracks. Titles include a great version of "Angie Girl", plus "I'd Be A Fool Right Now", "Nothing's Too Good For My Baby", "My Cherie Amour", "You Met Your Match", and "I Was Made To Love Her".  © 1996-2021, Dusty Groove, Inc.
(Red label stereo pressing. Cover has some ringwear on back.)

Living Legend
Contemporary, 1976. Near Mint-
LP...$14.99
An excellent 70s side from Art Pepper – recorded with a West Coast rhythm section that includes Hampton Hawes, Charlie Haden, and Shelly Manne! The trio all play here with a remarkable intensity, given the date of the session – and although the production's got that later, crisper ... LP, Vinyl record album