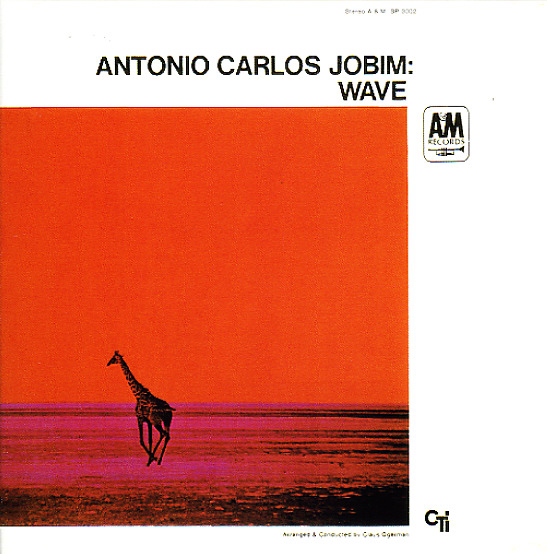 A stunning mix of talents that brings the heavenly piano and guitar of Antonio Carlos Jobim into play with the lush, but light arrangements of Claus Ogerman – a swirling mix of post-bossa loveliness that redefines Jobim's sound, and opens up new avenues for exploration in sound! The production is amazing – pillowy-soft, but with a complex depth that's hardly been matched again – and although Jobim's the main player, other great musicians include Dom Um Romao, Claudio Slon, Jerome Richardson, Ron Carter, and others. Tracks include "Wave", "Mojave", "Lamento", "Batidinha", "The Red Blouse", "Antiguq", and the groovy "Captain Bacardi". Beautiful all the way through!  © 1996-2022, Dusty Groove, Inc.
(Stereo tan label pressing with Van Gelder stamp in a matte red cover, with some surface wear and aging.)

Primal Roots
A&M, 1972. Very Good+
LP...$11.99
A really unique little album from Sergio Mendes and Brasil 77 – one that's in a much more rootsy style than any of his other work! The "primal roots" here are taken seriously, and like some of his other contemporaries in Brazilian music, Sergio's looking back a bit, and towards a ... LP, Vinyl record album

Fool On The Hill
A&M, 1968. Very Good- Gatefold
LP...$11.99
One of our favorite albums by Sergio Mendes & Brasil 66 – a perfect bridge between the simple pop of earlier records, and the group's expanding sound as the 70s approached! The warmly glowing Brasil 66 style is still very strongly in place, but the music here is all a bit hipper – ... LP, Vinyl record album

Confetti
A&M, 1984. Near Mint-
LP...$3.99
A bit more pop soul than some of Sergio Mendes' work from a few years back – but still the kind of set that shows that he's got a better ear for music than most of his contemporaries! As with Sergio's previous album, this one's got a fair bit of contributions from Robbie Buchanan – who ... LP, Vinyl record album

Sergio Mendes (1983)
A&M, 1983. Very Good+
LP...$7.99
Upbeat soul from Sergio Mendes – but a record that's still got a Brazilian heart beating underneath! The sound of the set is very much in the best mainstream soul modes of the time – never too electric overall, but put together with a nicely warm groove that continues the legacy of ... LP, Vinyl record album

Pais Tropical
A&M, 1971. Near Mint-
LP...$7.99
A great album from the early 70s – one that has Sergio and crew doing Brazilian tracks with a bit of an LA studio feel – one that takes their older bossa groove into even more soulful territory! Dave Grusin and Tom Scott did the arrangements, both in the best styles of their key early ... LP, Vinyl record album

New Face Of Luiz Bonfa
RCA, 1970. Very Good
LP...$6.99
A wickedly wonderful record from Luiz Bonfa – one that has his bossa-inflected guitar style supported by larger arrangements by Marty Manning. The feel is kind of bossa meets 60s easy meets early CTI – as Manning's work reminds us a lot of the larger orchestrations penned by Don ... LP, Vinyl record album