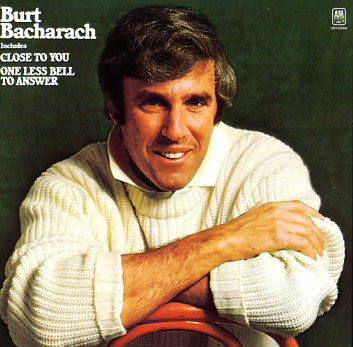 Insanely wonderful work by Bacharach – in a way that we can hardly begin to describe (but we'll certainly try!) By the time this one was recorded – 1971 – Burt's reputation as a songwriter and arranger were so firmly established that he had an incredible amount of freedom in the studio. Here, working with tunes that were mostly well-worn, plus a new one or two – Burt comes up with an amazingly complex set of arrangements, opening up his tunes like little flowers, focusing on a particular instrumental tendril, and drawing it out into incredible lines of melody and color. Proof of this is the album's extended version of "Wives & Lovers", or its suite for orchestra, entitled "And The People Were With Her". All tracks are great – from Burt's intimate vocal on "Hasbrook Heights", to the jangly instrumentation of "Freefall", to the completely recast versions of hits like "One Less Bell To Answer", "April Fools", and "Mexican Divorce".  © 1996-2022, Dusty Groove, Inc.
(Tan label stereo pressing, including A&M inner sleeve. Cover has light surface wear.)